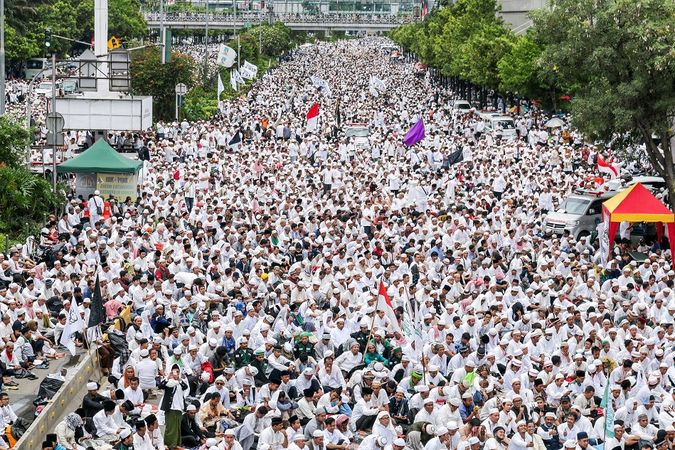 In the past months, Islamist activists had tried to defame Ahok by initiating a trial for alleged blashpemy, Photo: Abraham Arthemius via Flickr

According to the Society for Threatened Peoples (STP), the upcoming elections for the position of Governor of Indonesia’s capital, Jakarta, next Wednesday are to be seen as “highly significant” and as “an indicator for tolerance towards members of the minority groups”. “Indonesia is at a crossroads. The outcome of the highly anticipated elections will show whether there is still support for the secular state and for the values of respect for minorities and of diversity – or whether the Islamist forces have managed to gain more influence on politics,” explained Ulrich Delius, the STP’s Asia consultant, in Göttingen on Tuesday. “For democracy in Indonesia and for the country’s religious and ethnic minorities, it would be an important sign if the Christian governor Basuki Tjahaja Purnama, who is also known as ‘Ahok’, were to be confirmed in office, despite all the headwind. Indonesia’s Christians, Shiites, and Ahmadiyyah Muslims are afraid of the growing influence of radical Sunnis.”

The Governor’s election is considered to be a potential indicator for the outcome of the presidential elections, which are scheduled for 2019. In the past months, Islamist activists had tried to defame Ahok by initiating a trial for alleged blashpemy – and their mass demonstrations against Ahok serve as a cheap electoral campaign for the conservative Islamic parties. Ahok’s opponents in the run for the Governor’s office are accused of having supported the campaign of denigration to prevent his re-election.

“It is dangerous to play with fire by spreading hatred against religious and ethnic minorities in a multi-religions and multi-ethnic nation,” Delius warned. In the predominantly Muslim state, members of other faiths already have to live with frequent threats – and there have been several attacks against churches and mosques of Ahmadiyyah and Shi’ites. There has been a significant increase in religious intolerance. “The minorities are afraid of becoming victims of targeted agitation.”

Ahok, who is a Christian and belongs to the Chinese minority, had been a promising candidate before the blasphemy trial against him started in December 2016. Being Deputy Governor, he was able to take the office of Governor in 2014 without an election, after the former head of office, Joko Widodo, became President. Ahok was known to be a reformer, but he also made many enemies among the poorer Muslim population by having slums destroyed. His competitors are trying to use this against him, with the help of radical Islamists if need be. “For Indonesia, this would be a dramatic change of course, as the Pancasila state ideology, which has been in force for decades, emphasizes the secular character of the state,” said Delius.