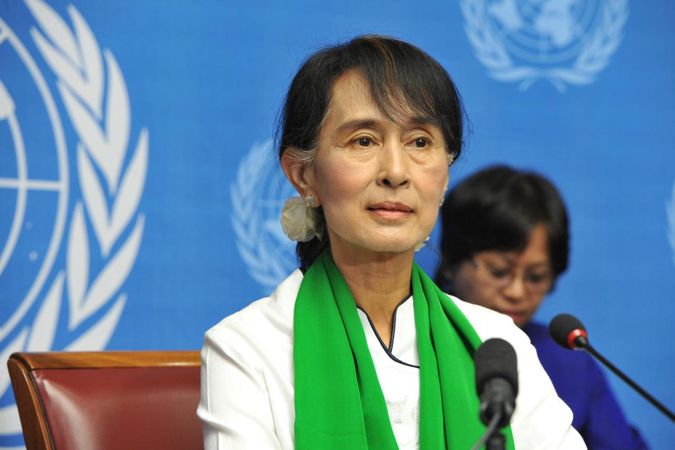 Nobel Peace Prize winner Aung San Suu Kyi has now been in office as Counsellor, Foreign Minister, and as de-facto State President for one year. Photo: Violaine Martin/UN-Geneva via Flickr

On occasion of the International Day Against Landmines, the Society for Threatened Peoples (STP) has sent an appeal to Burma’s State Counsellor Aung San Suu Kyi, demanding her to put an end to the production and use of landmines (which are banned almost all over the world) and to sign the International Mine Ban Treaty. “It is a shame for the democratic country of Burma that its government appears to be unable to demand the influential army to ban this cruel weapon. If this weapon – which is especially dangerous for the civilian population – were to be banned, this could also give new impetus for the stagnating peace process among the different nationalities in the country,” explained Ulrich Delius, the STP’s Asia Expert, in Göttingen on Monday. Apart from North Korea and Syria, Burma is the only state in the world that still allows its army to use anti-personnel mines to fight other armed groups. Thus, it is especially the civilian population in the minority nationality regions in the east of the country that is suffering. The people must also be better informed about the dangers of landmines, Delius demanded.

Nobel Peace Prize winner Aung San Suu Kyi has now been in office as Counsellor, Foreign Minister, and as de-facto State President for one year. “Once again, the International Day Against Landmines will go by without Burma committing itself to a ban on this cruel weapon,” Delius criticized. In June 2016, the ruling National League for Democracy (NLD), had promised the anti-landmine movement that Burma will sign the treaty. Apparently, however, the government cannot assert itself against the army.

In September 2016, Deputy Defense Minister General Major Myint Nwe had publicly informed the parliament that the army was in favor of using landmines – pointing out that the armed groups of the nationalities were using anti-personnel mines as well.

Around one-sixth of Burma’s administrative districts – 55 of a total of 325 – are considered to be contaminated with mines, especially in the minority nationality regions in the east of the country. In Burma, at least 3,745 people have been injured or killed by mines between 1999 and 2014. As a result, Burma has the third-highest number of mine victims in the world, after Afghanistan and Colombia. A total number of 159 mine accidents were registered in the year 2015. Often, the mines injure children who step on them while playing. Tourism is suffering too: in April 2016, two German tourists and their guide were injured by an exploding mine in Shan state. Many refugees living in neighboring Thailand are refusing to return to their home country for fear of mine accidents.