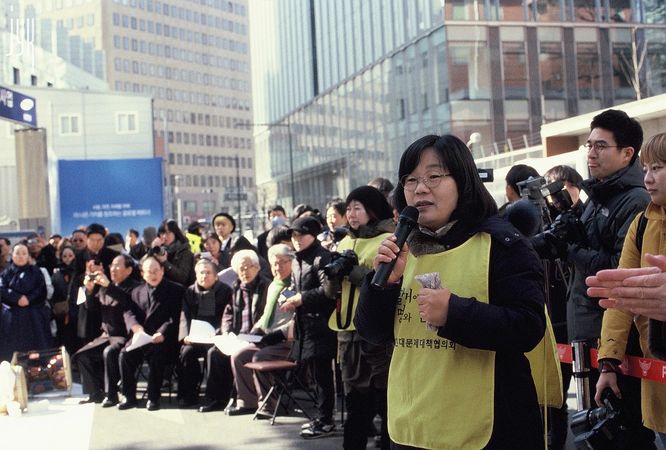 Yoon Mi Hyang, the president of the "Korean Council for the Women Drafted by Military Sexual Slavery by Japan" during a speech. The "comfort women" are still waiting for an official excuse of Japan. Picture: joonyoung kim/South Korea via Flickr CC BY-NC-ND 2.0

The Society for Threatened Peoples (STP) accuses Japan’s conservative government under Prime Minister Shinzo Abe of trying to whitewash the fate of women who were forced to work as prostitutes for the Japanese military before and during the Second World War. “Even 25 years after the suffering of the ‘comfort women’ was first publicly acknowledged by Japan, they are still waiting for an official apology. Instead of trying to come to terms with the past, the government under Abe is denying historical facts. However, Japan must act now, because the remaining women who survived these crimes will only have a few years left to live,” emphasized Ulrich Delius, the STP’s director, in Göttingen on Monday. August 14 is the day of remembrance for around 200,000 women who were forced into prostitution by the Japanese military. In the period of 1937 to 1945, these so-called “comfort women” were forced to serve as prostitutes for Japanese soldiers in Korea, China, Taiwan, Thailand, Burma, Vietnam, the Philippines, East Timor, and the Dutch East Indies.

According to the STP, it is a scandal that the suffering of these “comfort women” is still whitewashed or completely ignored in Japanese textbooks. The human rights organization mainly blames the Japanese government, which is trying to gloss over this dark chapter of Japanese history with new educational guidelines and a law on patriotic education. On several occasions, the Prime Minister and some of his closest advisers had publicly distanced themselves from the admission of guilt made by Yohei Kono, Senior Secretary of the Council of Ministers, on August 4, 1993. The so-called “Kono Declaration” had served as a basis for reconciliation with the neighboring countries. Japanese conservatives are criticizing historians’ statements that the “comfort women” were forced into prostitution – and Japan’s nationalists are trying to spread the perception that the women in the occupied countries had volunteered to work as prostitutes.

Last week, South Korea’s government announced that it would inaugurate a memorial for the “comfort women” tomorrow, and establish a scientific center to document the crimes. The Japanese government had expressed concern, emphasizing that this was against an agreement reached between the two states in 2015, according to which the establishment of a survivors’ support fund would rule out any further claims for compensation. In 2016, interventions from Japan had prevented the erection of a statue in Freiburg. “The government in Tokyo is trying to whitewash the fate of the “comfort women”. However, their suffering must no longer be euphemized if Japan is aiming to keep up good relations with its neighbors,” Delius stated.