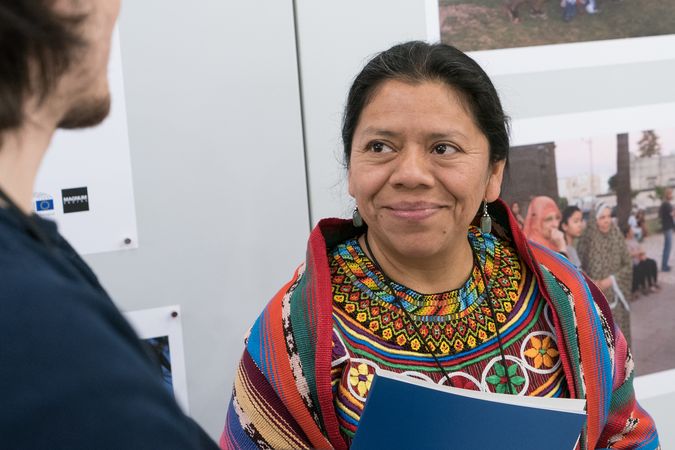 Aura Lolita Chávez has received death threats because she protested against illegal deforestation, which is destroying the livelihood of her people. Photo: © European Union 2017 - European Parliament via Flickr

For example, Aura Lolita Chávez, a Mayan woman from Guatemala, has received death threats because she protested against illegal deforestation, which is destroying the livelihood of her people. Illegal deforestation is a threat to the water supply of the indigenous communities, as the forest is an important water reservoir for the Maya. “Mother Earth has no price – she has to be defended,” the former teacher explained. As spokeswoman for the council of her people, she is trying to stop deforestation – also by intervening with the local authorities. There are indigenous wood transporters who check whether the trees were lawfully felled, and there are frequent conflicts with employees of wood companies.

The indigenous human rights activist Berta Caceres of the Lenca people in Honduras even lost her life because she dared to protest against the construction of a dam on a sacred river. She was murdered by contract killers in March 2016, after receiving numerous death threats. The police had decided not to grant her special protection, ignoring the threats.

“Indigenous human rights activists often suffer from massive hostility – not only in Central and South America, but also in Siberia and Indonesia,” Delius stated. For example, Yana Tannagasheva of the Shors in Siberia lost her job as a teacher because she protested against the destruction of her region due to coal mining. As can be seen from arson attacks and death threats against her family, her commitment for the human rights of the Shors is very dangerous.