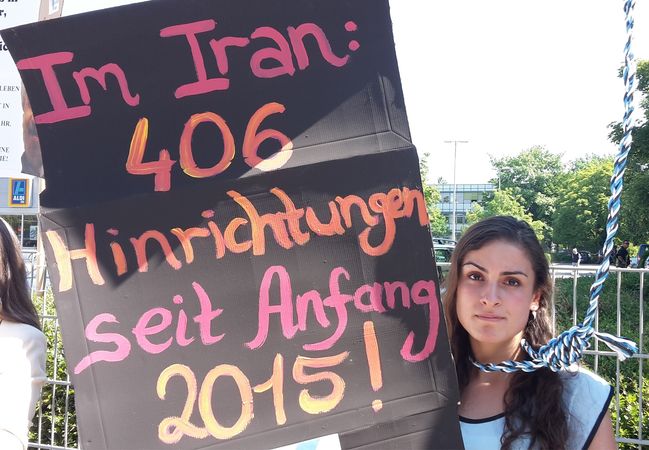 On occasion of the forthcoming presidential elections in Iran on May 19, the Society for Threatened Peoples (STP) and the International Society for Human Rights (ISHR) will be holding a vigil in front of the Iranian Consulate General in Frankfurt am Main (Germany) to emphasize that President Hassan Rohani, who is still in office, is not keeping his election promises. The human rights organizations will demand Rohani to stick to his promise that – in the event of his re-election – there would be measures to put an end to the persecution of minorities and dissenters in Iran.

In the multi-ethnic state of Iran, the ethnic groups of the Aseri, the Kurds, Arabs, Baluchis, Turkmen, Assyrians, and other ethnic minorities are not recognized as independent peoples with their own language and culture, and they are all suppressed and discriminated against. The same is true for individual religious communities. Edgar Lamm, Chairman of the ISHR, criticizes: “Communities and individuals with viewpoints that differ from the state religion – such as the Baha’i, the Sufi Dervishes, the Sunnis, and the Christian converts – are often arbitrarily accused of spying for foreign powers, and are declared as enemies of the state. Many of them are kept detained in Iranian prisons, under intolerable conditions.”

“Our human rights vigil aims to draw attention to the fate of all the prisoners who were merely arrested based on their political views or their religious affiliation. They must be released immediately,” said Kamal Sido, the STP’s Middle East Consultant. “Four years ago, President Hassan Rohani was elected in the hope that he would try to improve the situation of the oppressed and discriminated minorities, as he had promised before his election. The overwhelming majority of the Iranian population, which has been suffering under the theocratic Shi'ite Islamic regime for years, demands respect for minority rights, the release of all prisoners of conscience, and an abolition of the death penalty.”

Contact: Dr. Kamal Sido, head of STP's Middle East department and Martin Lessenthin, Speaker of the Board of the ISHR