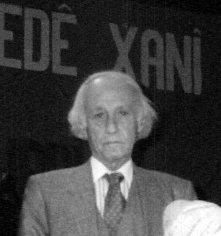 The Society for Threatened Peoples (STP) mourns the loss of a democrat, scientist and member of our advisory board, Ismet Chérif Vanly (Wanly). He died on the 9th of November 2011 at 4:00, some days before his 87th birthday, in his home in Lausanne.

Vanly worked closely with the STP at the end of the 1970s - a time when in Germany very little was known about the oppression of the Kurds and their struggle for independence - in order to prepare the three-volumes of “Kurdistan and the Kurds - pogrom, Reihe bedrohte Völker.” These books detailed why the Kurds thus far had been unable to achieve any form of national autonomy.

Vanly was born on the 21st of November 1924. His parents were Kurds from Turkish-Kurdistan, who later became citizens of Syria - his father was from Van, his mother from Diyarbakir. Ismet Chérif Vanly attended a primary school - which was founded in the 12th Century by Princess Rabio Khatun, a sister of Saladin - in the Kurdish quarter of Damascus. Later he went to Lebanon for school.

In France, the U.S.A., and Switzerland, Vanly studied Law and Philosophy. He received a PhD in Jurisprudence from the Universität Lausanne and later received his Masters in History from the University in Genf. He was granted a professorship in the Political and Social Sciences. He spoke, among other languages, French, English, Arabic, and Kurdish.

He also played an important role in the completion of the national liberation movement of his people. He focused his research on Kurdish history. He was president of the Association of Kurdish Students in Europe (KSSE) and later of the Committee for Kurdish Studies at the Sorbonne. His doctoral thesis on the political movements of the Kurds was written after several trips to the Kurdish regions of Iraq and Iran.

He relinquished his teaching position at the university in order to provide aid to the Kurdish uprising in Iraq from 1961-1975. He became the spokesperson for General Mustafa Barzanis and remained in that position until 1975. He was also a member of the Committee for the Rights of the Kurds in Europe. In 1963, the Baath Regime in Syria threatened Vanly with the death penalty.

Vanly was a member of the board of directors for the organization “Kurdish Jurists in Europe,” which he had founded in Switzerland in 1985. Ten years later, he was the chairman of the “Kurdish Institute in Berlin.” At the same time, he joined the “Kurdish Parliament in Exile” (PKDW) that was renamed the “Kurdish National Congress” (KNK) in 1999. Four years later, in 2003, the health status of the Democrats did not allow for any more political actions.

As a patriot and a democrat, who was respected by Kurdish people in the whole of Kurdistan, I.C. Vanly sought tirelessly to unite the Kurdish movement under the common goal of re-establishing autonomy; throughout all of this, he never lost sight of his primary goal, which was to achieve justice for the Kurds and other minorities by working continuously to illuminate their historical significance and their place as citizens in the Middle East.