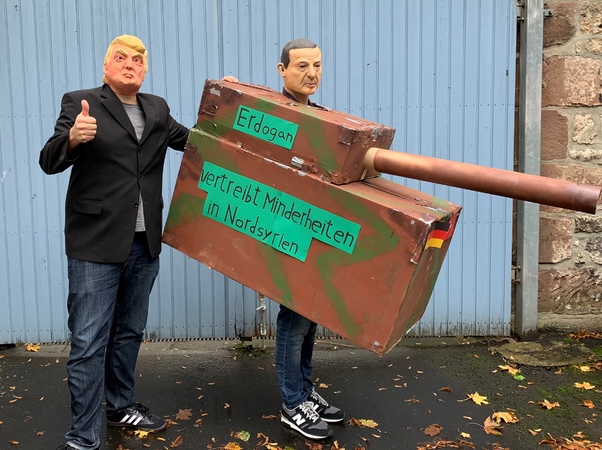 One year after NATO member Turkey's attack on northern Syria (September 9, 2019), the Society for Threatened Peoples (STP) appeals to US President Donald Trump to try and ensure that the Turkish occupation forces and their Islamist allies will leave Northern Syria – which was occupied in the course of the operation "Source of Peace" – to allow the Kurdish, Arab, Assyrian/Aramaic, Armenian, Christian, and Yazidi refugees to return to their homes.

"During and after the invasion, the Turkish troops and Syrian Islamists committed countless war crimes and human rights violations against the civilian population," criticized Dr. Kamal Sido, the STP's Middle East Consultant. The northern Syrian regions of Serekaniye (Arabic: Ras al Ain) and Tall Abyad are especially affected, as the people there are harassed and persecuted by Islamist groups. "The Kurdish forces and their Arab Assyro-Aramaic allies, as well as the Muslim, Christian, and Yazidi communities, are mourning tens of thousands of victims who lost their lives in the struggle against Islamic State and other radical Islamists. The women and men who fought against IS on the side of the West were betrayed," Sido emphasized. "The least they deserve is support from the United States to ensure that they can return to their homes.

Turkey was not met with international criticism for its attacks on Syria, encouraging the aggression: "In the course of the operation, Turkish President Erdogan learned that he can get away with just about anything, so he did not hesitate to incite the conflict in Nagorno-Karabakh to open war," Sido stated, adding that he hoped that the United States would return to the world stage and call its NATO ally to order.

Here you can download a German translation of the appeal.

Originally, the STP had planned a human rights rally in front of the US embassy in Berlin to mark the anniversary. However, due to the current situation with regard to the pandemic – Berlin Mitte is currently considered a risk area – the event had to be cancelled for safety reasons.