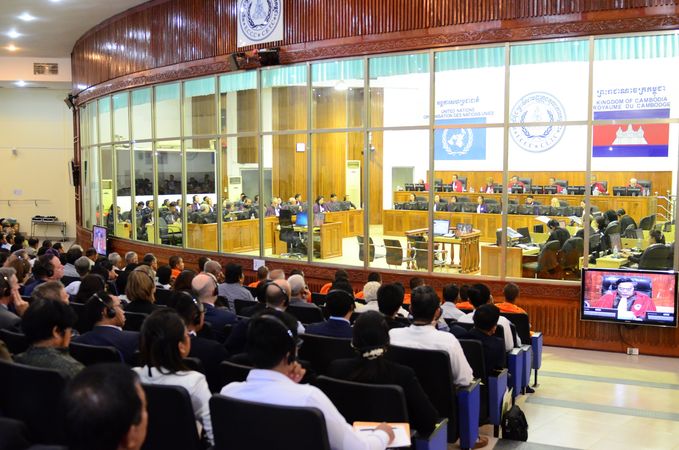 According to the Society for Threatened Peoples (STP), today's ruling of the Khmer Rouge Special Tribunal is to be seen as a "milestone" in the fight against impunity for crimes of the Pol Pot regime against minorities in Cambodia. Today, the Special Tribunal in Phnom Penh found two former senior Khmer Rouge leaders guilty of genocide crimes, crimes against humanity, and serious breaches of the Geneva Conventions. They were sentenced to life imprisonment. Khieu Samphan, leader of the "Democratic Kampuchea", and Nuon Chea, the chief ideologue of the Khmer Rouge – also known as "Brother No. 2" or as the Pol Pot's Deputy, must take responsibility for the persecution and assassination of many Vietnamese people. In addition, the Special Tribunal found Nuon Chea guilty of genocide crimes against the Muslim Cham.

The judges found that the Pol Pot regime had tried to wipe out the two ethnic minorities. During the first months of their rule, the Khmer Rouge forcibly deported around 170,000 ethnic Vietnamese to Vietnam, and hundreds had died during the deportations. The remaining approximately 20,000 ethnic Vietnamese were murdered, and children from mixed marriages who had a Vietnamese-born mother were killed as well. The Khmer Rouge are also guilty of persecuting and killing the Muslim Cham. According to the tribunal, about 36 percent of the Cham population was killed.

"We welcome the fact that the crimes against the Vietnamese people and the members of the Muslim minority have been defined as genocide crimes. Now, the suffering of the victims and their relatives is legally recognized and can be considered in the scope of reparation measures," stated Ulrich Delius, the STP's director. "This is an important step regarding the recognition of minorities and reconciliation with the majority society, which still has strong reservations, especially against the ethnic Vietnamese."

The Khmer Rouge had followed a Maoist ideal of a communist agrarian state. Between 1975 and 1979, at least 1.7 million people became victims of forced labor, hunger and illnesses, as well as executions, and party-internal purges. The reign of terror ended on January 7, 1979, when Vietnamese troops invaded the country.

It was not until 2003 that the United Nations and the Cambodian government agreed to set up a Special Tribunal, but only in order to prosecute high-ranking Khmer Rouge. Former middle cadres, some of whom are still holding important positions today, can not be held responsible.

In the first trial, in 2010, Kaing Guek Euv, Head of the notorious S-21 security prison, was sentenced to life imprisonment. In 2014, Khieu Samphan and Nuon Chea had already been found guilty of crimes against humanity in the first part of the second trial. To speed up the process, it had been split into two parts. Two other defendants died before the verdict.