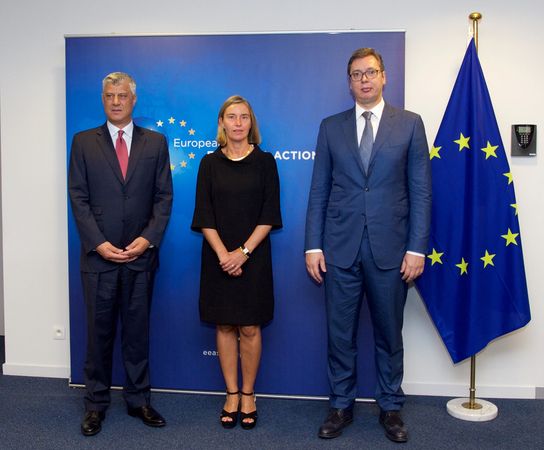 Hashim Thaci (l.), President of Kosovo and Aleksander Vucic, President of Serbia debate about a possible shift of borders or a land swap between the countries. Both should face their decisions in respect of their minorities. Picture: European External Action/Belgrade-Pristina dialogue via Flickr CC BY-NC 2.0

The Society for Threatened Peoples (STP) is concerned about the current discussion regarding a possible shifting of borders between Kosovo and Serbia. On Wednesday, the STP’s chairman of the federal board, Jan Diedrichsen (Berlin), warned against negotiating a “border deal” over the people’s heads. “Instead of trying to live out dreams of a ‘homogenous population’, both Serbia and Kosovo should take care of their respective minorities. In this regard, there is considerable demand – on both sides.”

The idea of a shifting of borders had been brought into play by the presidents of Kosovo and Serbia, Hashim Thaci and Aleksander Vucic. Thaci is allegedly prepared to give up the Serb-dominated north of Kosovo if Serbia recognizes Kosovo’s independence. In the case of a land swap, Kosovo could gain three Albanian-dominated municipalities in the Presevo Valley in southern Serbia. EU Enlargement Commissioner Johannes Hahn confirmed that there are ongoing negotiations, mediated by the EU.

Wolfgang Mayr (Bolzano), President of the STP International, emphasized that, in principle, direct negotiations between Serbia and Kosovo are always to be supported, and a bilateral agreement on the protection of minorities would be a milestone on the way to a EU membership. However, northern Kosovo should not be separated. Instead, there should be an autonomy solution based on the model of South Tyrol, which allows self-government. Kosovo and Serbia have been negotiating a normalization of relations since 2011.

“The Western Balkans will only be able to come to rest if it is possible to pay respect and recognition to the minorities – and, above all, to enable them to shape their future,” Diedrichsen emphasized. “It is absolutely necessary to stick to the principles of the Copenhagen criteria for admission into the EU: No adequate protection of minorities – no admission to the EU! A shifting of borders would be a completely wrong signal, and it is not a practicable solution.”

The Western Balkans are still deeply divided – and the overall situation, especially the question of the minorities, is extremely problematic. “You don’t have to be a prophet to suspect that a shifting of borders in Kosovo will soon cause the Republika Srpska in Bosnia and Herzegovina or the Albanian minority in Macedonia to declare independence,” Diedrichsen warned.

According to Diedrichsen, the EU should stick to the motto “united in diversity” regarding the Western Balkans, and there should be no precedent for efforts to homogenize the population. Instead of creating new demarcations, the EU should ensure that minorities can rely on coherent and binding protection, all oevr Europe. “It is incomprehensible that the European Commission, while arguing against the right to self-determination under international law, seems to be willing to agree to potential border shifts if this is brought into play by heads of government. This will not lead to more trust in Europe’s minority regions – quite the contrary.”

The Society for Threatened Peoples urged all parties involved to focus on federal solutions and on regional models of autonomy/self-government in Europe: “What we need is a Europe of the regions and a Europe of the minorities – not homogeneous nation states.

Contact: Jan Diedrichsen, Chairman of the STP Germany and Wolfgang Mayr, President of the STP International