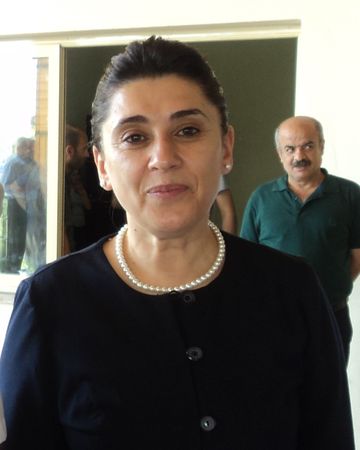 Leyla Zana, Kurdish politician and member of the Turkish parliament, has gone on a hunger strike to put pressure on the government and the PKK to re-enter peace negotiations. Zana, who was born in 1961 near Diyarbakir in eastern Anatolia, has become known as an advocate for the Kurds in Turkey. At the age of 14, she was married to Mehdi Zana, who was politically active and got arrested in 1980 for his active commitment towards the rights of the Kurds when he became mayor of Diyarbakir. When Leyla Zana visited her husband in prison, she was not allowed to speak to him in Kurdish, so she learned the Turkish language for the prison visits.

Leyla Zana herself experienced persecution and discrimination by the Turkish authorities as well. In 1991, she joined Turkey’s national parliament as a candidate of the Kurdish HEP-party. During the swearing-in ceremony, she said in Kurdish: “I shall struggle so that the Kurdish and Turkish peoples may live together in a democratic framework”. Unfortunately, her commitment for the rights of the Kurds and for peace in Turkey had its price. Zana was immediately dismissed from office and, in 1994, sentenced to 15 years imprisonment. Due to public and political pressure, she was released early in 2004. Since then, there have been repeated accusations against her. On December 4, 2008, Leyla Zana was sentenced to ten years in prison for alleged membership in a terrorist organization – and there are further legal procedures against her, even in her hometown Diyarbakir. The prosecutors are demanding up to 70 years imprisonment. Currently, she is still enjoys immunity as she is a member of the Turkish Parliament.

For decades, Zana has been following her dream that the Kurds and the Turkish people could coexist in peace. She has already won several awards for her commitment and was nominated for the Nobel Peace Prize twice. With her hunger strike, she now wants to enforce new peace negotiations between the warring parties in Turkey. The truce was lifted after an attack in the Turkish city Suruç near the Syrian border on July 20 of this year.