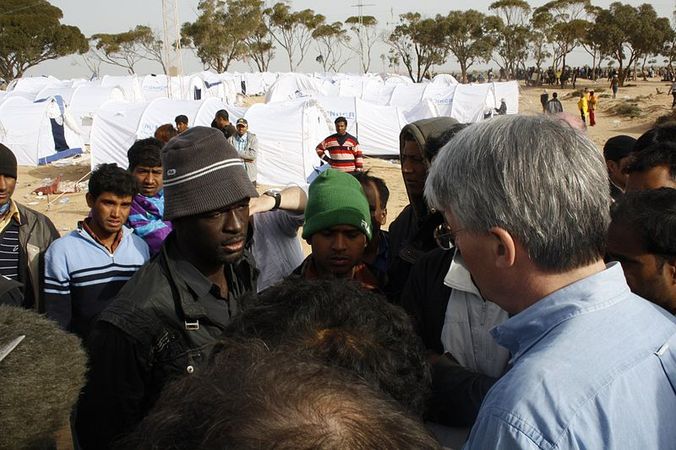 People from Tawergha were chased away only because of their dark skin colour. Picture: DFID - UK Department for International Development via Flickr CC BY 2.0

Following the signing of a peace agreement between the warring cities of Misrata and Tawergha in Libya, the Society for Threatened Peoples (STP) demanded that 48,000 dark-skinned former inhabitants of Tawergha should now be able to return to their hometown. “The months-long dispute about these victims of racism shows how difficult it is to work towards reconciliation between perpetrators and victims of violence in Libya,” stated Ulrich Delius, the STP’s director, in Göttingen on Tuesday. Originally, the return of Tawergha’s former inhabitants to their ruined city had been scheduled for February 1, 2018 – but armed militiamen had forcibly kept them from entering the city. Around 2,200 people were forced to return to their makeshift shelters in the surrounding desert.

The peace agreement was signed last Sunday, after weeks of difficult negotiations between delegations from both cities. Initially, the ceremony had been scheduled for Friday, but it had to be postponed because of remaining disagreements. “Still, it is a sign of hope that the dispute over Tawergha appears to have been resolved,” said Delius. “Now, the peace agreement must be implemented by all the parties involved – to ensure that it will not remain empty paper. Unfortunately, the agreement does not include precise plans when to repatriate the refugees and to rebuild the city.”

The inhabitants of Tawergha have been suffering from persecution and marginalization for years – showing how everyday life in Libya is determined by warlords, by arbitrariness and lawlessness. The 48,000 displaced people from Tawergha were driven away from the city following the fall of Muammar al Gaddafi in August 2011, as they were seen as supporters of the dictator. Previously, Libyan soldiers from Tawergha had attacked the neighboring town of Misrata. The inhabitants of Tawergha had claimed to be innocent – but in vain. Hundreds were abducted, tortured, or murdered by armed militiamen. The remainder of the population were driven out of the city, and some had to find protection abroad. Thus, there is a group of former inhabitants of Tawergha living in Saxony.

“Tawergha is an example of the widespread racism in Libya. The displaced people were chased away only because of their dark skin color – in a predominantly Arab region,” Delius reported. “The alleged support for Gaddafi was used as an excuse to discriminate and persecute this entire group of Libyan citizens.”