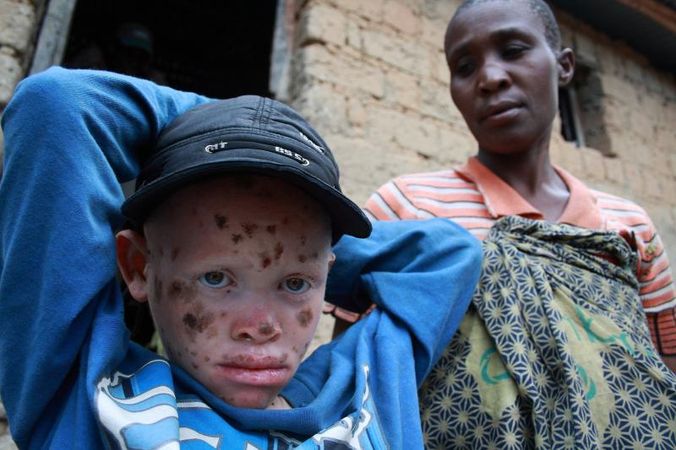 Especially in the south and east of Africa, people with albinism often have to fear for their lives because ritual importance is attributed to their body parts. Photo: IFRC via Flickr

Following the murder of an albino child in Malawi, the Society for Threatened Peoples (STP) has demanded better protection for people with albinism in African countries, calling for targeted measures to combat illegal trade with body parts. “Especially in the south and east of Africa, people with albinism often have to fear for their lives because ritual importance is attributed to their body parts. The police and the prosecutor’s office must punish all attacks on albinos and intensify their efforts to prevent violence,” stated Ulrich Delius, the STP’s Africa-expert, in Göttingen on Tuesday. Last weekend, the corpse of a nine-year-old albino boy had been found in the South-East African state of Malawi – murdered by his own parents, who intended to sell the body parts. At least 18 people with albinism have been murdered in Malawi since November 2014.

The boy’s family is originally from neighboring Mozambique. From there, the parents had traveled to the district Chikwawa on March 22 – together with their child, which was still alive back then. After being arrested, the mother confessed to have killed her son with a poisoned drink. She wanted to sell the body parts to traders for ritual purposes. When this turned out to be difficult, the parents buried the corpse. Now, despite their confession, they will probably be tried for murder.

“The latest murder of a person with albinism is especially tragic, because the child was killed by its own parents – from low motives. In rural regions, many impoverished couples feel unable to bring up albino children, and some parents hide them in their huts – for years, and under inhumane conditions – so as not to be marginalized by the village community,” Delius reported. “There is a great need for action, also in the field of the German development policy. It is necessary to work against prejudices and to improve education for the children and their parents!”

Often, people with albinism are killed by unscrupulous traffickers. In Chikwawa district, for example, hired killers had tried to strangle the 38-year-old Gift Notisi in his sleep on March 31, 2017. But the albino was able to defend himself. He was hurt by a machete. A few days earlier, a trafficker had been arrested in Malawi’s capital, Lilongwe. He had been in possession of the bones of an albino who had been buried in April 2016. The grave had been plundered.