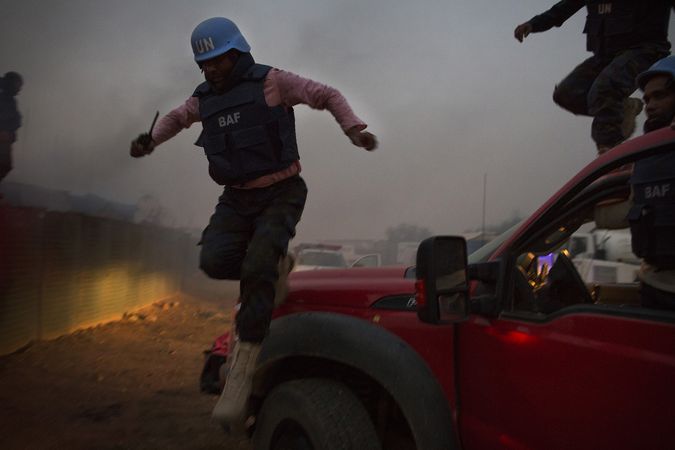 For UN peacekeepers, Mali is the most dangerous area of operation. 21 armed members of the MINUSMA peacekeeping mission were killed in 2017, plus seven civilian employees of the United Nations. Photo: United Nations Photo via Flickr

Mali is suffering from an increase in violent attacks by Islamist extremists. As the Göttingen-based human rights organization Society for Threatened Peoples (STP) reported on Sunday, at least 78 people lost their lives in terrorist attacks in the north and in the center of the north-west African country since the beginning of the year 2018. “There is no end to the Bundeswehr mission in sight, and Mali’s army is completely overburdened with trying to protect the civilian population. To make matters worse, the Tuareg conflict in the north of the country is still not over – despite a peace treaty that was signed in 2015. The European Union must go to more effort to actually enforce this peace agreement, to take more effective measures to combat Islamist terror,” said Ulrich Delius, the STP’s director, in Göttingen on Sunday. On Saturday, 31 people got killed when Islamist militants attacked a military camp near the city of Timbuktu. Last Thursday, 26 civilians got killed when their bus hit a mine.

It is the Malian soldiers who are especially at risk, as they are attacked by Islamist militias every week. In 2017, a total number of 716 soldiers got killed in the embattled north and center of Mali – and 548 security guards were injured in 40 attacks by extremists. 125 Malian soldiers lost their lives in 2016, and there were 50 victims in 2015. “The dramatic increase in deaths clearly shows that the security situation has deteriorated. Almost 50 percent of the victims were stationed in the central regions of Mopti and Ségou. Islamist violence is increasingly spreading from the north of the country to its center,” Delius stated.

For UN peacekeepers, Mali is the most dangerous area of operation. 21 armed members of the MINUSMA peacekeeping mission were killed in 2017, plus seven civilian employees of the United Nations.

With regard to the struggle against Islamist terror, it is especially problematic that there is still no peace between the Tuareg, the Peulhs, and the army in the north of the country. “Many aspects of the peace treaty that was signed in Algiers 31 months ago have still not been implemented, so it must be asked whether Mali’s government is giving enough priority to measures against Islamist terror – or whether it is primarily trying to oppress the people in the north of the country, who are protesting against the decades of neglect,” Delius said.