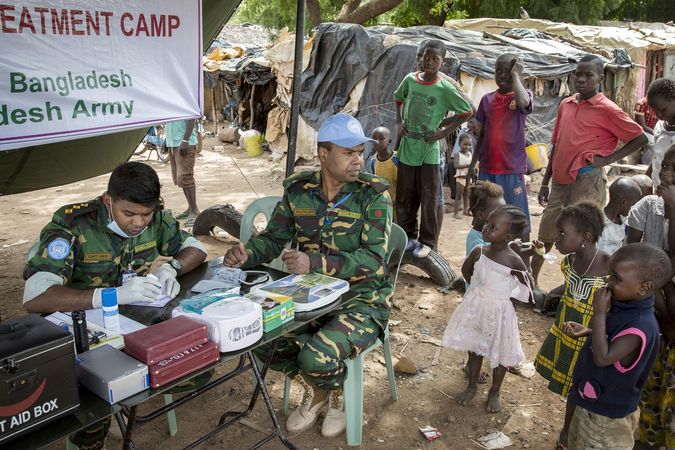 The STP calls for more protection and security for the civilian population in the embattled center of the country. Militias should not go unpunished for harassing people on the basis of their ethnic origin. Picture: UN Photo/Marco Dormino via Flickr CC BY-NC-ND 2.0

In the preliminary stage to the run-off elections in Mali, the Society for Threatened Peoples (STP) calls for more protection and security for the civilian population in the embattled center of the country. “There are more and more violent clashes between the ethnic groups of the Peulhs and the Dogon. If the government lets the center of the country become a legal vacuum, the Bundeswehr misson to stabilize northern Mali will become more and more dangerous and questionable,” warned Ulrich Delius, the STP’s director, in Göttingen on Friday. The second round of the presidential elections in Mali will take place next Sunday. The former incumbent president Ibrahim Boubacar Keita is considered a promising candidate.

According to the STP, the militias and criminal gangs should not go unpunished for harassing people solely on the basis of their ethnic origin. On Thursday, the bodies of 14 Peulhs were found. They had been kidnapped by militiamen on Tuesday. Since the beginning of the year, 317 people have lost their lives in clashes between the Peulhs and the Dogon. The recent casualties are attributed to a Dogon militia that has repeatedly gotten attention for attacking Peulhs. Many Dogon believe that the Peulhs support Islamist groups because they are frustrated that the government is neglecting their region. “It is the Islamists who benefit from the conflict between the ethnic groups, as there is less and less security in Mali,” warned Delius.

It was only on July 25, 2018, that the bodies of 17 unarmed Peulhs had been found in the region. They are said to have been murdered by a Dogon militia. At the end of June 2018, a total number of 42 Peulhs had been killed in similar incident in Koumaga.

The causes of the conflict between the traditional nomadic Peulh shepherds and the Dogon, who live as peasants in villages, are manifold. The conflict is fueled by climate change and the depleting resources of pasture and farmland. Other factors are the population growth and the general lack of prospects in the region, which is largely ignored and neglected by the government and authorities. Due to the growing dissatisfaction among the Peulhs, Islamist militias are able to recruit new fighters in the region.