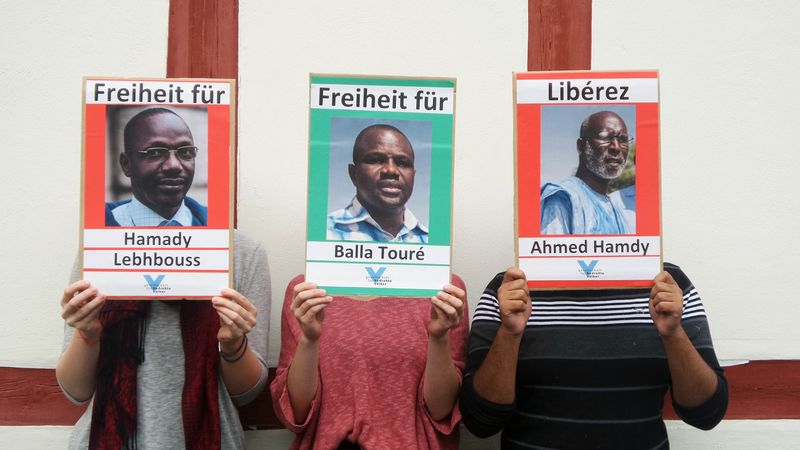 23 defendants were accused of instigating slum dwellers to protest against the impending evacuation of their homes on June 29, 2016 – and of organizing a partly violent demonstration. Photo: STP

The Society for Threatened Peoples (STP) criticizes the harsh sentences against 13 slavery-critics and seven protesters in Mauritania. “The long prison sentences are a result of an unfair trial on Thursday night. Clearly, the biased judgements are to be seen as an attempt to silence human rights activists,” said STP-representative Ulrich Delius in Göttingen on Friday. “What happened during the past two weeks is a judicial farce – an attempt to give the impression of a rule of law, but aimed to lock away unwanted human rights activists for as long as possible.”

The 23 defendants were accused of instigating slum dwellers to protest against the impending evacuation of their homes on June 29, 2016 – and of organizing a partly violent demonstration. This was interpreted as “rebellion”, a “breach of the peace” and “armed resistance”. In addition, they were accused of resistance against the police.

Only three of the defendants were acquitted, 20 others were sentenced to prison terms of three to eight years. In addition, the convicts will have to pay 94,000 Euros in damages to the riot police and the state. There are 13 leading members of the human rights organization IRA-Mauritanie among the convicts. They claimed to be innocent and accused the police of torture in custody as a means to get “confessions”. The other defendants were people who live in the slums.

“Despite great efforts – involving examinations of the cell phones and computers of the defendants – the investigators did not manage to find evidence that they had actually taken part in the protests or committed any other crime,” said Delius. Even the owner of the land that has been occupied by slum dwellers for many years did not recognize the IRA-representatives as accomplices – and he also disagreed with the statement of the police. In court, he reiterated that the slum dwellers had protested spontaneously, without instigations. The imprisoned IRA members pressed charges against ten police officers, accusing them of abuse and torture, but the court did not question the presented results of the controversial police investigation.

More than 30 local and international human rights organizations had demanded the immediate release of the 13 IRA-representatives who had been arrested in late June 2016. According to Amnesty International, they are to be seen as nonviolent prisoners of conscience.