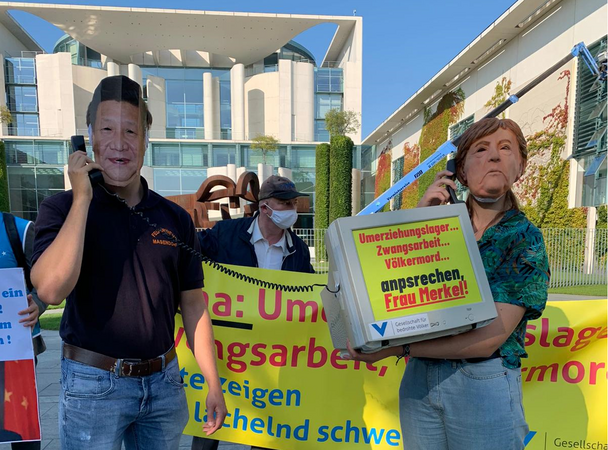 "There will have to be changes in the China policy of the EU. Merkel's rapprochement policy must give way to a more conflict-ready policy that emphasizes respect for human rights and European values," demanded Ulrich Delius, the STP's Director. Picture: Caroline Siems/STP 2020

Today, a video conference between EU leaders and the Chinese government took place – and several human rights organizations had called for a human rights action in front of the Federal Chancellery, demanding the EU to place more emphasis on the human rights situation in China: the rally was organized by the Society for Threatened Peoples (STP), the World Uyghur Congress (WUC), the International Campaign for Tibet, the Tibet Initiative Germany, the Ilham Tohti Initiative, and the Hong Kong Association in Germany e.V.

"There will have to be changes in the China policy of the EU. Merkel's rapprochement policy must give way to a more conflict-ready policy that emphasizes respect for human rights and European values," demanded Ulrich Delius, the STP's Director. "Further, the EU must impose sanctions on those who are responsible for the genocide crimes in Xinjiang. Should China continue its genocide against the Muslim Uyghurs and Kazakhs, the EU should also be prepared to boycott the Winter Olympics, which are supposed to take place in China in February 2022.

In the course of the session, China will be campaigning for renewed membership in the United Nations Human Rights Council. The EU should reject this unequivocally. "The People's Republic is extending its oppression policy to more and more parts of the population. This escalation will continue as long as the leadership in Beijing is not met with clear international resistance," Delius criticized. Only fear of economic losses could force Xi Jinping to give in.

The oppression of the Tibetan population continues unabated, and the persecution of the Muslim ethnic groups in Xinjiang/East Turkestan has intensified massively since about 2017. "The communist leadership has already started the next offensive – this time in Inner Mongolia," Delius stated. "With its campaign against the Mongolian language, the Communist Party is again violating Chinese laws and its own constitution. This behavior is in no way compatible with European values, and the EU must not stand back for economic reasons.

Several members of the Mongolian ethnic group took part in the event at the Chancellor's Office today.