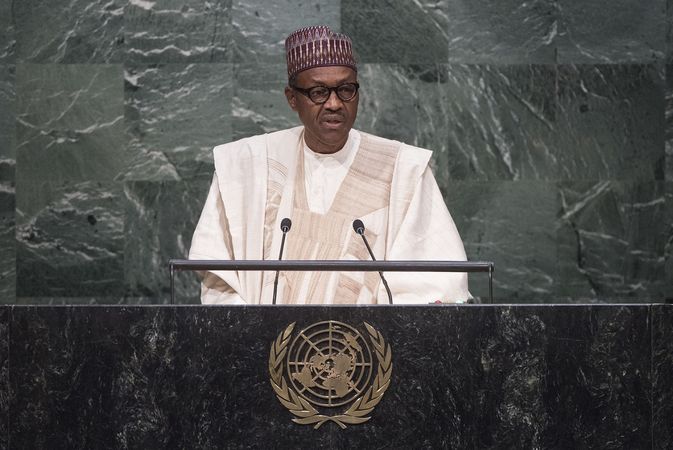 The nigerian government of Muhamadu Buhari should advocate for a solution of the Fulani-Crisis in order to protect the christian minority in the country. Picture: UN Photo/Amanda Voisard via Flickr CC BY-NC-ND 2.0

The Society for Threatened Peoples (STP) has appealed to Chancellor Angela Merkel to use her visit to Nigeria to advocate for better protection of the Christian population from attacks by the Muslim Fulani nomads. “The Chancellor will be discussing the Boko Haram conflict with Nigeria’s President Muhamadu Buhari – but the Fulani conflict is claiming even more victims. The ongoing attacks on rural villages must no longer go unpunished. Nigeria’s government must finally make serious efforts to find a political solution to the Fulani conflict,” stated Ulrich Delius, the STP’s director in Göttingen on Wednesday. The STP pointed out that at least 1357 people got killed in attacks by Fulani nomads since January 2018. Thus, the number of victims is six times higher than in the Boko Haram conflict during the same period. Most of the victims were Christians.

Further, the human rights organization strongly criticized Nigeria’s authorities for treating the Fulani crisis merely as a security issue. In June 2018, a total number of 300 soldiers and seven combat helicopters were stationed in the center of the country to curb the violence. “However, the helicopter missions against Fulani nomads are stirring up even more violence,” Delius warned. Soldiers have repeatedly opened fire on civilians whom they mistook for Fulani nomads. According to army reports, at least 21 alleged Fulani were killed by soldiers in August 2018 – and there were even attacks on Christian villages.

The Fulani crisis is not new, but it is escalating more and more, as the government has not done much against it. Instead of promoting a local or regional dialogue between the nomads and the predominantly Christian peasants, there were attempts to whitewash the situation. Climate change, dwindling resources, loss of pastures, a lack of development measures in northern Nigeria, and growing cattle herds are fueling the tensions between nomads and peasants. The nomads are pushing from the increasingly dry north to the south of the country, where most of the land is held by small farmers. “It is very problematic that Nigeria’s government seems to be unable to come up with a solution other than forcing the nomads to settle and assimilate – relying on violence and exclusion instead of a rule of law and dialogue. Thus, new conflicts are inevitable,” Delius emphasized.