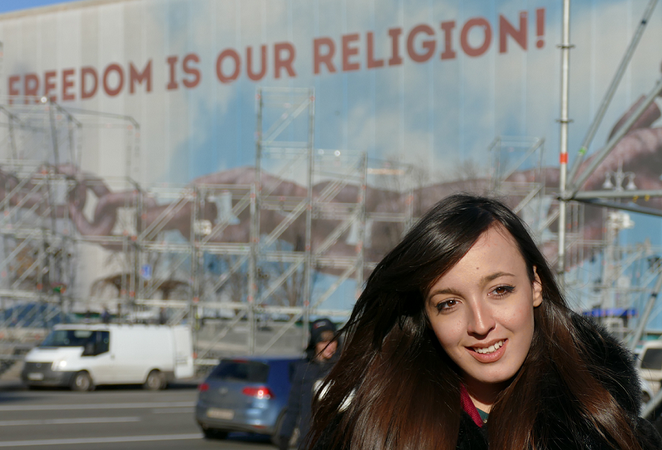 In 2017, Bielova had participated in an exchange between minorities from Ukraine and Germany, which the STP had carried out together with the Crimean Tatar organization DEVAM. Picture: Böttcher/STP (2017)

On the evening of October 24, Roma activist Anzhelika Bielova was attacked and seriously injured by an unknown attacker. The culprit is on the run. Bielova runs the organization Lacho Drome, a center for Roma rights in the southern Ukrainian city of Zaporizhia. "We are shocked by this targeted attack on a minority rights activist," stated Jasna Causevic, the Society for Threatened Peoples' Expert on Genocide Prevention and the Responsibility to Protect. "We expect the Ukrainian judiciary to respond swiftly and decisively. The government of President Volodymyr Selenskyj must ensure that members of minority groups are safe – especially the Roma. Also, civil society actors must be able to work freely and safely."

On Thursday evening, the 24-year-old Roma woman had been followed on the way from a supermarket back to her home, before she was stabbed in front of her apartment door. After an emergency operation, she is now in intensive care. In 2017, Bielova had participated in an exchange between minorities from Ukraine and Germany, which the STP had carried out together with the Crimean Tatar organization DEVAM. The project "Building Bridges between Minorities in Germany and Ukraine" was funded by the Federal Foreign Office.

There are also ongoing attacks on Roma people. On April 21, 2018, members of the right-wing group C14 drove away 15 Roma families from their makeshift shelters in Lysa Hora, a nature reserve near Kiev. The armed neo-Nazis chased parents who tried to escape with their toddlers, throwing stones at them. A video that was uploaded to social media on April 25 shows a group of masked skinheads chasing Roma families after burning down the makeshift tents in which the families lived.

Many of the Roma try hard to become integrated and to cooperate with the authorities, but there are cases in which members of the non-Roma majority demanded that their Roma neighbors should be banned from using public transport or from stopping at local shops. In 2018, the administration of the Holosiyiv District was accused of denying Roma people social benefits and of using right-wing intimidation tactics.

There are several ethnic and religious minorities in Ukraine. Although the country has ratified all major international conventions on the protection and the rights of minorities, members of these minority groups are often underprivileged and poorly integrated.

Contact: Jasna Causevic, STP's Expert on Genocide Prevention and the Responsibility to Protect