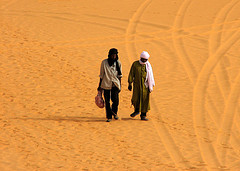 The Society for Threatened Peoples (STP) demands a rethinking of famine aid. If attention is paid to the warning signals that come from traditional societies such as the nomads in East Africa, devastating famines can be prevented. "Distributing food only makes sense as a last resort to save lives," asserted Ulrich Delius of the STP's Africa section. "It does not contribute to a lasting solution, but rather creates new dependencies. In addition, it is financially an enormously costly measure."

"Many famines in East Africa could be prevented if governments and authorities would show more respect for the nomads and take the first signs of difficulties with the food supply more seriously," said Delius. Human rights and aid organizations had drawn attention to a sharp increase in livestock rustling as early as last year. Rustling is a clear indication that battles over fertile pasture land and wells are growing more intense.

But rather than grappling with the problems of the nomads, the largest population of the famine-threatened regions of East Africa, governments in East Africa press for the herdsman to become farmers, because the authorities find the subsistence strategy of nomads to be archaic. Agricultural experts, on the other hand, are in agreement that only nomads can survive in these extremely arid regions. Their livestock and milk production are an important contribution to the economy in these states.

The nomads are demanding long-term programs for the promotion of their economic system, more wells and better water pumps, more training in the vaccination of livestock, and open access to pasture lands in neighboring countries that had traditionally been used to get through dry periods. Currently, nomads on the borders of Kenya, Uganda and Tanzania seeking relief from the drought in neighboring countries are often arrested or shot by border guards. Famines could be prevented if the nomads were to receive livestock feed in time to prevent the decimation of their herds.

Now, it will take up to 400 million euros over the coming weeks in Somalia, Uganda, Kenya and Ethiopia to prevent a massive dying off of livestock. "And the next famine is inevitable. In three years, the region could suffer massive drought again," warned Delius. Where just fifty years ago the famines came in ten-year cycles, today a state of emergency has to be declared every three years.