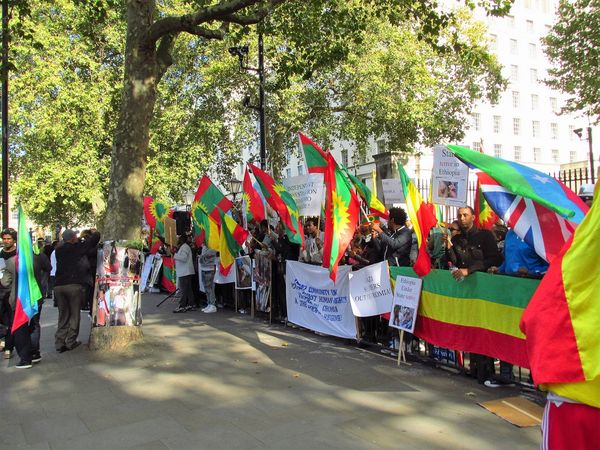 After years of ethnic oppression and demonstrating for their own rights, the Oromo could become the next perpetrators themselves. Picture: David Holt via Flickr CC BY 2.0

Following the violent deaths of more than 60 members of smaller ethnic groups in Ethiopia, the Society for Threatened Peoples (STP) calls for better protection of ethnic minorities against politically motivated violence. Further, those who are responsible should be punished. “In order not to endanger the democratization process in Ethiopia, these serious attacks on members of minority groups must not go unpunished! The country must urgently implement a rule of law to effectively end arbitrariness and violence,” stated Ulrich Delius, the STP’s director, in Göttingen on Tuesday. In addition, it would be necessary to take measures against hate speech in social media, which has been fueling the conflicts.

Last weekend, more than 60 people lost their lives in violent attacks by Oromo people against members of smaller ethnic minorities in the vicinity of the Ethiopian capital Addis Ababa. On Monday, the security forces shot five people who had protested against the violence. Several thousand members of smaller ethnic groups had taken to the streets to speak out against violence.

According to the STP, Ethiopia is now – after decades of ethnically motivated exclusion and repression – to be seen as a powder keg. “There is no other country in the world in which as many people were driven away from their home region in the first half of 2018,” Delius emphasized. Between January and July 2018, around 1.4 million people were forced to leave their houses or flats in order to seek shelter in other parts of the country at the Horn of Africa – due to politically motivated violence. “After having to suffer through decades of violence and repression, the Oromo are increasingly responsible for ethnic discrimination themselves. This is a very dangerous development that needs to be addressed by measures against violence and by strengthening the rule of law!”

The attacks took place after the triumphant return of exiled Oromo activists. In Burayu district in the Oromia region, young Oromo had attacked houses of Gamo and Guraghe families. Eyewitnesses reported looting, arson, rape, and murder. Around 200 alleged victims were arrested.