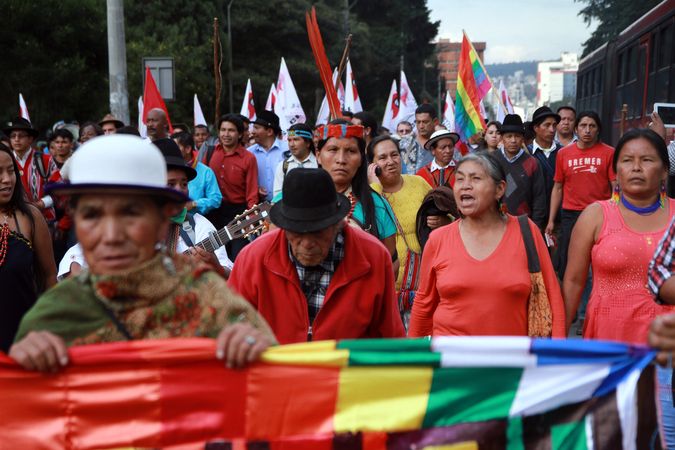 On Sunday evening, after eleven days of widespread demonstrations, the Ecuadorian government and the indigenous umbrella organization Confederation of Indigenous Nations of Ecuador (CONAIE) reached an agreement: the controversial Decree 883 was suspended on October 13 "The outcome of the negotiations is an important success for the indigenous movement of Ecuador," stated Regina Sonk, STP expert on indigenous communities. "It is especially the poorer people who are affected by the discontinuation of the diesel subsidies – mostly indigenous people and small farmers who live from agriculture." Decree 883 is part of an austerity program that the International Monetary Fund (IMF) had called for as a condition for further support. Now, a joint commission is supposed to develop alternatives.

"However, the agreement will by no means suffice to put an end of the conflict. It might help to solve the problems with Ecuador's public finances – but it won't help to stop the violence," Sonk fears. According to the office of the National Ombudsman for Human Rights, 7 people were killed in the course of the protests. A total number of 1,340 were injured and 1,152 were detained. Against this background, Jaime Vargas, President of CONAIE, demanded Interior Minister María Paula Romo and Defense Minister Oswaldo Jarrín to resign. "There are still more than a thousand detained protesters. They must be set free immediately. The protests must not be criminalized, and the deaths have to be investigated." Now, it is up to the United Nations to monitor the further process.

With the controversial Decree 883, President Lenin Moreno had aimed to suspend the subsidies for fuels, which had been in place for four decades. The measure is part of a multi-billion dollar austerity program to meet the requirements for an immediate IMF credit. Ecuador had asked for the credit to get a grip on public debt, which had gone completely out of hand under the previous government. The resulting increase in prices for diesel fuel by over 100 percent is especially problematic for indigenous peoples and small farmers. At the same time, oil production is supposed to be stepped up once again. Further, it is especially the indigenous people and small farmers who are affected by far-reaching relocation plans and by environmental pollution. Now, a commission of indigenous representatives, led by the Episcopal Conference and the UN Mission in Ecuador, is to work out a new decree.