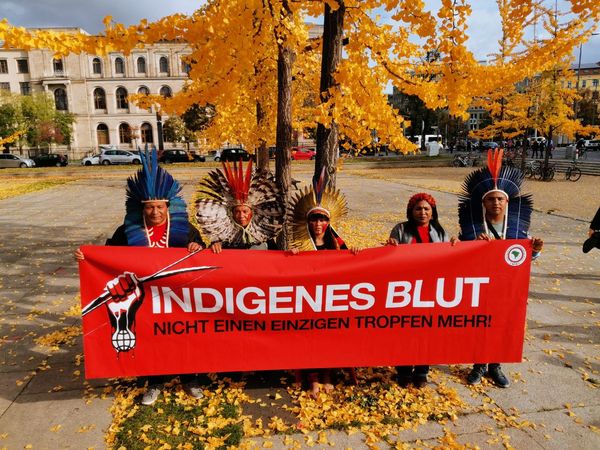 In October, an Indigenous delegation was touring Europe to raise awareness of the rights of indigenous people and the relevance of the ILO 169. Picture: Linda Fiene/STP 2019

The Minority Council addresses issues that are important for the members of the four autochthonous national minorities in Germany – the Danes, the Frisians, the German Sinti and Roma, and the Lusatian Sorbs. It is committed to their support and protection and represents the interests of the four minority groups vis-à-vis the Federal Government and the German Bundestag.

Now, the minority groups expressed their solidarity with the threatened indigenous peoples worldwide. In the letter, they demand the ratification of the so-called "ILO Convention 169", as is governed in the Coalition Agreement:

"We are extremely concerned about the increasing human rights violations against indigenous peoples. Indigenous human rights advocates and environmental activists are especially likely to become victims of violence or even murder. Indigenous people all over the world are still discriminated against – politically, economically, and socially – and many are under pressure to give up their traditional or self-determined lifestyles.

Therefore, we welcome the fact that the coalition agreement mentions the ratification of Convention No. 169 of the International Labor Organization (ILO), a convention on the rights of indigenous peoples.

As national minorities in Germany, we would like to emphasize that we support the ratification of ILO Convention 169, and we hope that this will be implemented during this legislative period."

The chairman of the Minority Council, Jon Hardon Hansen, stated: "It goes without saying that we, the national minorities in Germany, support the indigenous communities worldwide. We experienced several forms of discrimination and threats throughout our own history – and it took us a long time to develop instruments to address our concerns within the legal frameworks on the national and the European level. The federal government should ratify ILO Convention 169 as soon as possible in order to support the threatened indigenous communities."

The chairman of the Society for Threatened Peoples, Jan Diedrichsen, added: "Now, there is no reason why the Federal Government should delay the ratification of ILO Convention 169 any further. As stated in the coalition agreement, ILO Convention 169 sends an important message to the indigenous communities all over the world. It is a sign of solidarity that the minority council has positioned itself so clearly in this matter."

Indigenous communities are the original inhabitants of their territories, managed to preserve at least a remnant of their own language, religion, and culture and – in many cases – still live in close relationship with nature. They often become victims of exploitation, oppression, discrimination, and even genocide. Their livelihoods are often threatened by corporations and the states, but also by regulations, for example on nature conservation, which make it impossible for them to decide about their own future.

Worldwide, there are around 6,000 indigenous communities, with between 350 and 440 million members – four to five percent of the world's population.

The enforcement of their internationally recognized human rights is one of the greatest challenges of our time – also because the key role they play in protecting the biodiversity of our planet and the global climate has made the concerns of indigenous peoples an important political issue (IPBES 2019, CLARA Report 2019). In countries such as Brazil, their territories are currently the most important areas in trying to stop the destruction of the rainforests, as satellite images clearly show.

In order to clarify and protect their individual and collective rights, ILO Convention 169 emerged within the framework of the International Labor Organization and – thanks to the political activism of indigenous representatives, the United Nations Declaration Nations on the rights of indigenous peoples on the level of the United Nations.