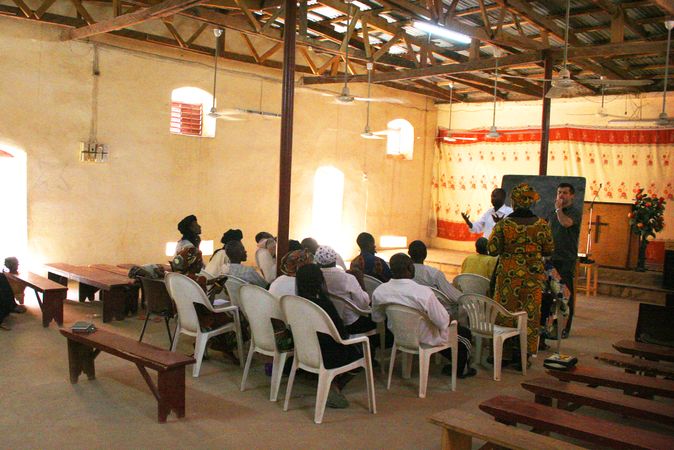 The interior of a church in Zinder, Niger. Photo: © Joris Jan van den Boom via Flickr

One year after more than 70 churches were destroyed during violent protests against Christians in Niger, the Society for Threatened Peoples (STP) demands more consistent measures to ensure that those who are responsible for the violence will be held accountable. “Anyone who burns down churches systematically or threatens other people because of their religious beliefs must be held accountable. For the the endangered minority groups, impunity will lead to even more threats in the long run,” said Ulrich Delius, the STP’s Africa-consultant, in Göttingen on Monday. On January 16 and 17, 2015, about 70 suspects were taken into custody for allegedly taking part in the riots that broke out following demonstrations of solidarity for the victims of the terrorist attack on the editorial office of the French satirical magazine “Charlie Hebdo”. However, no charges were filed against the detainees yet. There are still public debates whether Islamist extremists or the political opposition were responsible for the violence.

Ten people lost their lives in the riots. 72 churches, many schools and other institutional buildings were burned, as well as private homes of pastors and shops run by Christians. About 80 percent of the Christian churches in the country were destroyed in just four hours. The capital Niamey and the town of Zinder were especially affected.

One year after the riots, many churches have only been repaired provisionally, and services often take place outdoors. The reconstruction work will probably cost about three million Euros, which the impoverished communities will not be able to raise on their own. The bishops don’t want to accept money from the state, so as not to incite envy among the Muslim majority. Thus, some of the reconstruction work is done by community members and Muslim helpers. Following the violence, the Christians and Muslims are trying to stand together to affirm that the two religious communities in the West African country get along with each other. In many places, committees were established to promote a dialogue between the two religious communities.

Following the riots, eyewitnesses reported that the perpetrators – mostly young people – had chosen their targets from lists. The protests were not spontaneous, but a planned campaign against the Christian minority, conceived by radical Islamists. After the recent terrorist attacks in Burkina Faso and Mali, the Christian people in Niger (only about two percent of the population) are living in growing fear of even more Islamist violence.