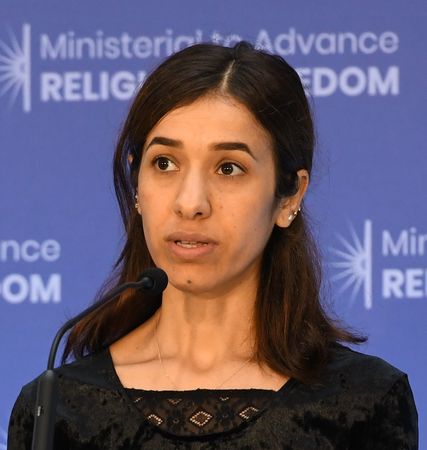 The Society for Threatened Peoples (GfbV) has described the Nobel Peace Prize for Nadia Murad and Denis Mukwege as "great encouragement in the global fight against sexual violence". Picture: U.S. Department of State via Wikimedia Commons | U.S. Government Works

According to the Society for Threatened Peoples (STP), the fact that Nadia Murad and Denis Mukwege were honored with the Nobel Peace Prize is a great encouragement in the global struggle against sexualized violence. On Friday, following the announcement of this year’s Nobel Peace Prize, STP-director Ulrich Delius stated: “This is an encouraging statement against the indifference with which many governments are treating the issue of rape as a weapon of war. More than 3,000 Yazidi women are still held hostage and are sexually abused by Islamic State fighters. For the victims of such crimes against humanity, it is an important sign of solidarity that their suffering will not be forgotten. For the human rights activist Nadia Murad, it is an encouragement to keep up her efforts to bring to justice those who are responsible for the violence.”

The human rights organization praised Nadia Murad for giving an example of how IS terror survivors can take action to ensure that their tormentors will be held accountable.

Since she was freed from Islamic State, Nadia Murad has been a longtime partner of the STP. We helped her to arrange meetings and talks at ministries or in parliaments – and her efforts became exemplary for commitment to help victims of sexual violence. We also supported Denis Mukwege and his unprecedented commitment to the victims of rape in the civil war in eastern Congo for many years. “For them, this award is tremendously empowering and encouraging, but it will hopefully also help the victims of sexualized violence to get more financial support for psychological and social care – because trauma work, although it is so important, is still often neglected in attempts to settle conflicts and to build peace,” Delius emphasized.

For years, the STP has been demanding Germany to provide shelter to traumatized Yazidi women who were raped. Also, the surviving victims of the conflict in Iraq should receive more support. Several German states have developed programs to provide help for Yazidi victims of sexualized violence.

This issue is highly topical and needs more publicity. The Rohingya in Burma and the women in the region of Darfur in Sudan have been suffering from sexualized violence for many years as well. “The Nobel Peace Prize will give new impetus to promote protection against sexualized violence,” Delius stated.