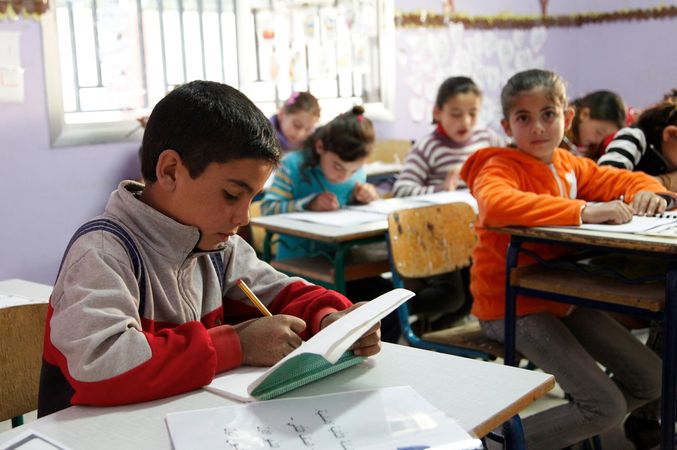 The assyrian-aramaic and armenic communities in Jazira are deeply worried about an administrative decree according to which their private and church schools in the province of Al-Hasakh must be "registered". Picture: Russell Watkins/Department for International Development via Flickr [Symbolpicture]

The Society for Threatened Peoples (STP) and the Central Association of Assyrian Organizations in Germany (Zentralverband der assyrischen Vereinigungen in Deutschland, ZAVD) and its European Sections have appealed to the Kurdish-dominated autonomous administration of the northern Syrian region of Jazira not to impose new curricula on Christian private schools in the province of Al-Hasakah. “Many Assyrian-Aramaic and Armenian Christians fear that their children’s school reports will not be recognized by the government in Damascus or elsewhere, thus interfering with their plans for the future,” stated Kamal Sido, the STP’s Middle East consultant, in Göttingen on Tuesday. The human rights advocate warned that the worries of the Christian communities must be taken seriously – otherwise, the Christians in northern Syria might get the impression that they are no longer welcome there: “The region has been a home to them for thousands of years. Together with the Kurds, they are trying to protect the region from radical Islamist groups which are supported by the Turkish government. All ethnic groups in northern Syria are at risk.

The Assyrian-Aramaic and Armenian communities in Jazira are deeply worried about an administrative decree (to be found on several social media channels) according to which their private and church schools in the province of Al-Hasakah must be “registered”. “Many are worried that this decree could lead to a closure of the schools if they do not comply,” Sido criticized. Then, about 7,000 school pupils would no longer be able to attend lessons. The new school year starts in early September 2018.

The Kurdish “People’s Defense Units” (YPG), together with different Assyrian-Aramaic and Arab groups, have so far managed to defend the province of Al-Hasakah – with its Kurdish, Arab, Christian, and Yezidi population – against Islamic State (IS) and other radical Islamist forces. The YPG’s struggle against IS and the attempt to establish a multi-ethnic and multi-religious autonomous region had gotten worldwide attention. “The dispute over the curricula has to be resolved soon – in the interest of the Christian minorities and with regard to the principle of peaceful coexistence. Otherwise, the reputation of the North Syrian autonomous administration will suffer,” Sido fears.