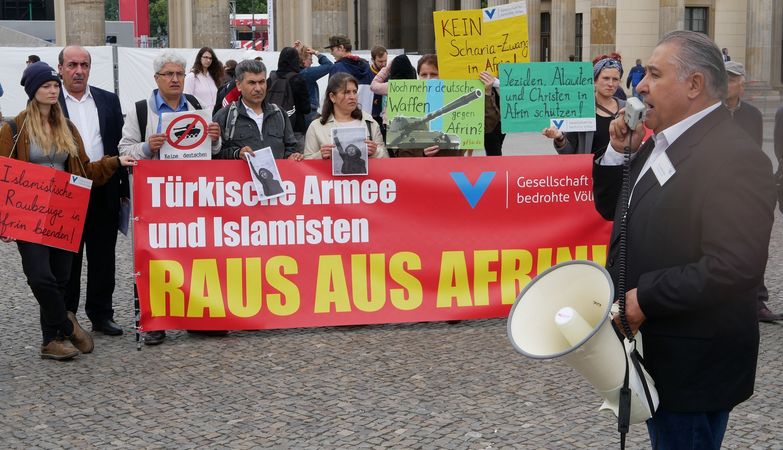 Middle East Consultant Kamal Sido at a Human Rights Action by the Society for Threatened Peoples in Berlin. Picture: STP

The Society for Threatened Peoples (STP) raises serious allegations against the Turkish occupying power in the Kurdish region of Afrin in northern Syria. “While Donald Trump and Vladimir Putin talked about the Syria crisis during their meeting in Helsinki, Turkish President Recep Tayyip Erdogan ordered his henchmen to murder, expel, and expropriate people in the occupied region of Afrin. There is a ban on all Kurdish scripts and signs, and the schools will not be allowed to resume lessons in Kurdish after the holidays,” stated Kamal Sido, the STP’s Middle East Consultant, who is from Afrin himself, in Göttingen on Tuesday.

According to the STP, Kurdish activists documented around 120 abductions, seven murders, ten robberies and 27 raids between July 1 and 15. In addition, the assailants set fire to four fields. “However, that’s just the tip of the iceberg,” Sido criticized. “At least 3,000 Kurds were deported since the Turkish army invaded the Kurdish region on March 18. There are estimates that as many as 7,000 Kurds have disappeared – and many families are trying to hide away for fear of further attacks.  Turkish soldiers and Islamist fighters often confiscate civilian peoples’ cellphones to find out who passes on information about their attacks.”

The Kurds are also living in fear of losing their property to Arab-Sunni settlers from other parts of the country. “Last week, the ‘legal department’ of Afrin’s local council (which was installed by the Turkish occupying power) demanded all residents to submit their purchase contracts – allegedly as a basis to review the procedures for the purchase of real estate,” Sido stated. The approximately 250,000 Kurds who managed to escape from Afrin before the Turkish attacks are unable to assert their claims.

The Turkish army has already brought tens of thousands of Arabic Islamists into the Kurdish region. Many of the new settlers are armed, and many of them are members of one of the various Islamist groups. They support the Turkish occupation army by killing, torturing, and expropriating the Kurdish civilians who are still living in Afrin – and the Islamic Sharia law was introduced in the once very liberal and open region. Thus, women no longer dare to go outside without a headscarf, and almost all the people in the streets are either men with long beards or women wearing the Islamic niqab. Due to the Islamization policy, it is no longer possible to live a Yezidi or Alevi life in Afrin. The small Christian community of approximately 1,000 people has disappeared.