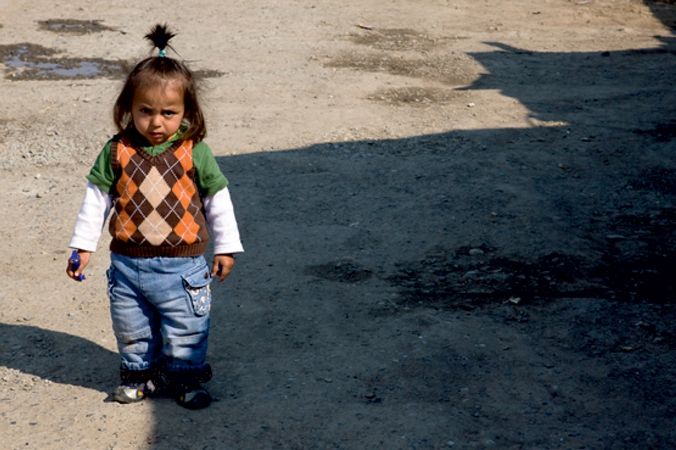 The STP’s report is based on interviews with 50 people (who have 213 children). In view of the many health issues of the Roma, it is quite certain that they have suffered life-long damage as a result of the high levels of lead in the UN refugee camps. Photo: STP

In 2008, American lawyer Dianne Post submitted a complaint – in the name of 192 Roma, Ashkali, and Balkan Egyptians from Kosovo – to the UN Human Rights Advisory Panel (HRAP), which was responsible for the United Nations Interim Administration Mission in Kosovo (UNMIK). The Roma, Ashkali, and Balkan Egyptians had suffered serious damage to their health while living in the five refugee camps in northern Mitrovicë/Mitrovica, where UNMIK had provided shelter for the internally displaced persons in the period from 1999 to 2013. The camps were contaminated with lead and other heavy metals. The Society for Threatened Peoples (STP) supported the complaint.

In the camps, the refugees were exposed to serious heavy metal pollution – including lead, arsenic, and cadmium. In 1999, the United Nations High Commissioner for Refugees (UNHCR) and the partner Action by Churches Together (ACT) had set up the camps close to the lead-contaminated landfills of the Trep?a Mine Complex – despite repeated warnings from several experts – including the World Health Organization (WHO). Originally, the camp residents were supposed to stay there for only 45 days. The hills around the camp consisted of the waste material of a smelting plant that had been shut down in 2000.

From there, the wind carried dust to the refugee camps. According to the WHO, 88 percent of the area were not suitable for people to live on – due to the proximity to the smelter plant. The lead levels in the soil were many times higher than the critical value.

About 600 Roma, Ashkali, and Balkan Egyptians lived in the refugee camps for several years – and they inevitably took in enormous amounts of lead, either through the respiratory tract, through food, or as a fetus (through the placenta).

The former residents of the contaminated refugee camps are still suffering from health problems. In order to put more pressure on the UN, its bodies, and the Kosovo government – to make them follow the recommendations of the UN Human Rights Advisory Panel on and to pay individual compensation to those affected – the STP conducted a survey in August 2017. This survey is supposed to provide an overview of the current health status of the affected people, as a basis to define necessary steps to effectively protect and enforce the rights of the Roma, the Ashkali, and the Balkan Egyptians.

First of all, it is important to note that the STP – as a human rights organization – can not give a professional opinion whether (or to what extent) the health problems of the former residents of the IDP refugee camps in Kosovo are a direct consequence of lead poisoning in the 1990s. In order to be sure, the people would have to be examined again, from the perspective of environmental medicine. A suitable screening method would be to take hair, urine and blood samples. In addition, further analyzes such as metabolism tests (e.g., organic acids, hormones, etc.) might be helpful.

Nevertheless, the results of the STP’s survey and the statements of environmental physician Klaus-Dietrich Runow suggest that, while living in the refugee camps, the people were exposed to excessive levels of lead, and that they could have suffered long-term damage. This assumption is supported by the fact that there are not only signs of “classic” lead poisoning, but also symptoms that are likely to correspond to autoimmune diseases.

To be sure about the situation, the STP – supported by the environmental physician Klaus-Dietrich Runow – demands more exact examinations, especially of the affected children and women. Further, all affected persons must be granted adequate medical treatment by international medical teams. It is especially the children who need help. The survey clearly showed that the difficult economic and social situation, but also the lack of health care for the Roma, the Ashkali, and the Balkan Egyptians, did not improve after they left the refugee camps. This was also confirmed in a report by Human Rights Watch, published in September 2017.

Some of the interviewees even stated that they felt better when living in the ref ugee camps than they do today. This devastating statement proves that the government of Kosovo, the international community, and the United Nations have failed. They should have made sure that the depressing reality of the Roma, Ashkali, and Balkan Egyptians could change for the better. An essential contribution to do so could be to effectively strengthen their minority rights – and to end discrimination by the authorities and in society. This would include compensation for the victims of lead poisoning, as well as an official apology by the UN.

You can read the full report online or download it for free: “Poisonous Refuge - Increasing signs of long-term harm suffered by Kosovo Roma refugees in lead–contaminated UN camps” (pdf)

Or you can buy a print version of it in our Online-Shop: Go To Online-Shop (category: documentations)