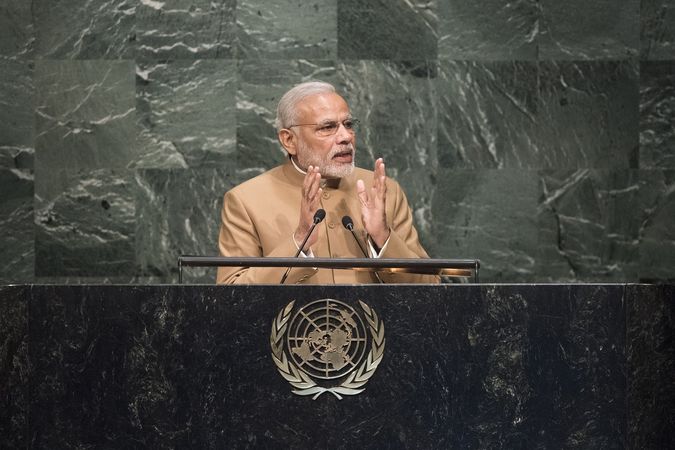 “India’s Hindu nationalist Prime Minister Narendra Modi is relying on populism and the exclusion of people of other religions to strengthen his power", Delius stated. Photo: Mark Garten via UN Photo

In view of the triumph of the Hindu nationalists in the regional elections in India, the Society for Threatened Peoples (STP) warns that religious minorities might have to fear attacks by Hindu extremists. “We are deeply concerned that the new Hindu nationalist chief minister in India’s most populous state, Uttar Pradesh, might lead on the systematic exclusion and marginalization of
people of other religions. Occupational bans that are based solely on religious reasons are to be seen as violations of India’s secular state constitution and as violations of the international human rights conventions,” explained Ulrich Delius, the STP’s Director, in Göttingen on Tuesday.

Since yesterday morning, all 41 slaughterhouses in the federal state (which has 204 million inhabitants) are on strike, as a means of protest against arbitrary closures by the regional government. As a sign of solidarity, the fish traders will go on strike as well – as of today. Most of the slaughterhouses in the country are operated by Muslims. From their point of view, the state-imposed closures are targeted attacks on their economic existence and, thus, violations of the right to freedom of profession. The authorities, on the other hand, are denying that the closures were arbitrary, stating that their actions were aimed at illegal slaughterhouses that slaughtered cows, which are considered as sacred in India. However, the regional governments have not yet provided any proof regarding the illegal status of the slaughterhouses – and the slaughterhouses reassured that they had only processed and sold meat from water buffaloes and goats, in accordance with the laws.

The controversial decrees had been issued by the new Prime Minister of Uttar Pradesh, the radical Hindu demagogue Yogi Adityanath. He and his nationalist Bharatiya Janata Party (BJP) had won a landslide victory in the regional elections in March 2017. Before the elections, he had already caused a stir with racist and demagogic comments about people of other religions. Thus, he had repeatedly demanded that India should become a Hindu nation and that more people should convert from Christianity to Hinduism. Further, he accused Mother Theresa of trying to Christianize India – and has repeatedly been especially disrespectful towards Islam. Thus, he stated that 100 Muslim women should be forced to “convert” to Hinduism for every Hindu girl that voluntarily converts to another faith. About 20 percent of the population of Uttar Pradesh are Muslims, and about 0.2 percent are Christians.

“India’s Hindu nationalist Prime Minister Narendra Modi is relying on populism and the exclusion of people of other religions to strengthen his power. Instead of furthering a dialogue, he aims to polarize – which is a fatal development for Asia’s largest democracy,” Delius stated.