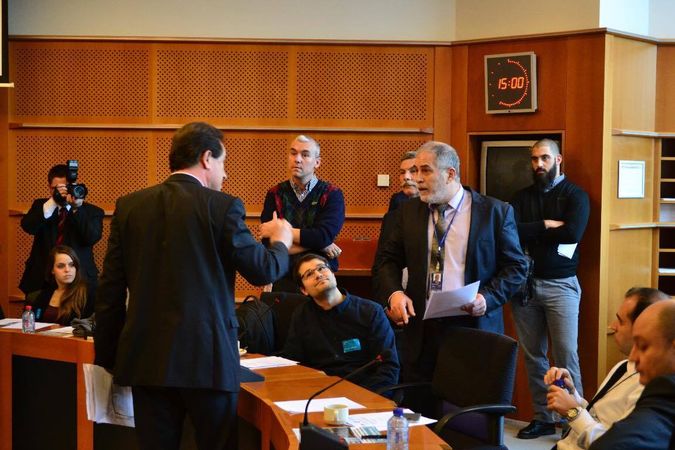 Members of the Greek nationalist extremist party “Golden Dawn” have caused a scandal in the EU Parliament. They disrupted an information event focusing on the Turkish minority in Greece.

The Society for Threatened Peoples (STP) is shocked by yesterday’s uproar in the European Parliament, in which members of the Greek nationalist extremist party “Golden Dawn” disrupted an information event focusing on the Turkish minority in Greece. “Martin Schultz, President of the European Parliament, must find clear words: He must condemn the unspeakable behavior of the members of the racist “Golden Dawn”-party at yesterday’s information event on the Greek minority policy,” demanded Tilman Zülch, Secretary General of the Society for Threatened Peoples, in Göttingen on Thursday.

Together with representatives of the Turks of Western Thrace (Greece), Csaba Sogor – a representative of the European People’s Party (EPP) and a member of the Hungarian minority in Romania himself – had given a report on the precarious situation of the minorities in Greece. Members of the “Golden Dawn” party had disturbed the hearing by shouting threats and insults, and by a generally aggressive behavior. Security guards had to intervene before the session could be continued.

The international human rights organization sent a letter to Parliament President Martin Schulz, stating that the incident should be taken as an opportunity for a change of course in the European minority policy. “The Parliament must emphasize its solidarity with all minority groups in Greece and the EU,” Zülch wrote in his letter to Martin Schulz. “Unfortunately, the discrimination against minorities in Greece did not improve since Tsipras came into power,” said Zülch.

In Europe, there are more than 100 million people who belong to a national minority – and about 40 million people speak one of the minority languages in the European Union. In the Lisbon Treaty, the European Union defined the protection of national minorities as one of the EU’s fundamental obligations. To date, however, there is no stringent policy for the protection of minorities in Europe. Many languages and cultures are close to extinction, and there is a significant increase in nationalist hostility – as can be seen in Greece.

“Only a consistent strategy, an initiative by the EU, can preserve Europe’s diversity. The enemies of democracy and of the minority groups, like the members of “Golden Dawn”, must know that our democracy will defend its values vigorously,” Zülch said.