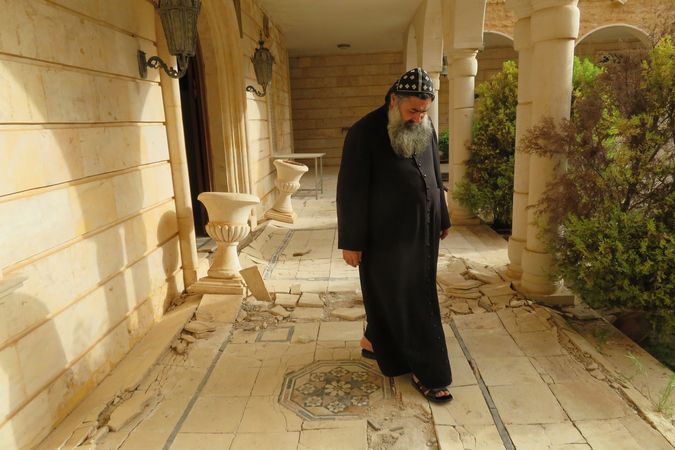 Soon there will be no more Christians in northern Syria if Erdogan and other Islamists are not stopped. Picture: K. Sido/STP (April 2019).

In Germany and Europe, many Christians are preparing for Christmas in peace and freedom. "However, some Christian communities – especially in Islamic countries – will not be able to celebrate this important time of the year in peace," fears Dr. Kamal Sido, Middle East Consultant of the Society for Threatened Peoples (STP). "In Syria and Iraq, which have been suffering from unrest and civil wars for years, the few remaining Christians feel increasingly insecure – and other non-Muslim ethnic groups such as the Yazidis, Mandeans, or Baha'i are under pressure as well. For Christians in these countries, the main dangers are a lack of state order as well as the marauding Islamist militias.

In the summer of 2019, there were less than 150,000 Christians living in Iraq – compared to 1.5 million before the United States invaded the country in 2003. "Within a generation, the Christian population shrank by 90 percent," Sido explained. "The same phenomenon can be seen in Syria: By mid-2017, there were an estimated 500,000 Syrian Christians, compared to more than 1.5 million before the beginning of the conflict in 2011." The peak of the mass exodus of the Christian population was between 2017 and 2018.

Following the demise of the so-called Islamic State (IS) in northern and eastern Syria – defeated by the Kurdish-led Syrian Democratic Forces (SDF) – the situation for religious minorities in parts of Syria and Iraq had initially improved. "However, now that Turkey has invaded northern Syria – which is to be seen as a violation of international law, with ongoing air raids on Kurdish positions in Iraq – many sleeper cells of IS have become active," stated the Middle East expert. There are more and more bomb attacks with many civilian victims.

While Turkey supported and financed radical Sunni militias, Shiite militias received help from Iran. "Although these groups are hostile towards each other, they share contempt for Christians, Yazidis, Mandeans, Baha'is, and Jews," Sido emphasized. "In Syria, the Turkish-backed Sunni Islamists even consider the Kurdish Muslims as enemies of Islam because most Kurds strictly reject Sharia law. All this leads to flight and migration."

Due to the ongoing oppression and persecution, targeted kidnappings, and killings of Christians in Iraq and Syria, Christian life in these countries is threatened. Many Christians are speaking of a genocide. "They expect more support and solidarity from the large Christian churches in Germany, Europe, and America. It is necessary to put pressure on politics to try and find a solution to the conflict," Sido stated. "Only then will the situation of the Christians and other ethnic groups in the region improve, putting an end to flight and migration.