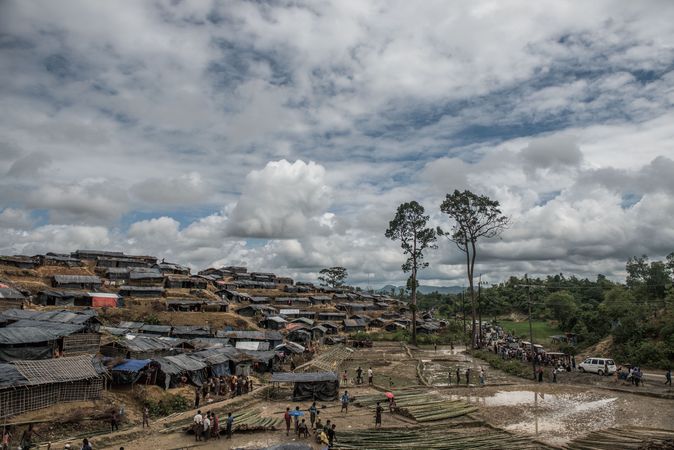 There are petitions circulating in the camps, demanding that the Rohingya must officially be recognized as an ethnic group in Burma, and that they must be granted their basic human and civil rights before returning. Photo: CAFOD Photo Library via Flickr

According to the Society for Threatened Peoples (STP), the EU Foreign Ministers should – in the course of their meeting tomorrow – condemn the planned repatriation of Rohingya refugees from Bangladesh to their home country, Burma. “The repatriation initiative, which has been widely discussed in the media, is a cynical farce. It is supposed to give the impression that a considerable number of refugees will be able to return safely. However, most of the 655,000 refugees will not leave Bangladesh voluntarily as long as they are not safe in Burma, and as long they are not granted their human rights,” said Ulrich Delius, the STP’s director, in Göttingen on Sunday. “This is a staged initiative, aimed at reassuring the people and the international community. However, it will not be a solution to the Rohingya crisis, and it will only raise false expectations. As long as the crimes committed in Burma are not brought to light, and as long as minority groups are not safe there, attempts to repatriate the refugees are bound to fail.” The repatriation is scheduled to begin next Tuesday.

The governments of Bangladesh and Burma are trying to create the impression that the refugees could be repatriated within two years. “If, however, 1,500 people are repatriated every week – as was agreed – the repatriation will take around nine years. Bangladesh had insisted on 15,000 returnees per week, but had not been able to put across this proposal in the negotiations between the two states on January 15, 2018.

Rohingya exile organizations are demanding more safety for the returning refugees, emphasizing that the process should be monitored by the United Nations High Commissioner for Refugees (UNHCR). Further, there are petitions circulating in the camps, demanding that the Rohingya must officially be recognized as an ethnic group in Burma, and that they must be granted their basic human and civil rights before returning. “However, Burma is still far from that goal,” said Delius.

There are still attacks by the Burmese army against members of the minority group. Due to the ongoing violence, about 70 to 120 Rohingya refugees arrive in Bangladesh every day. But the Bangladeshi authorities are not willing to grant the refugees shelter for a longer term. Around 6,500 refugees are currently trapped in the border area between the two countries. Together with a group of Hindu refugees, they are the supposed to be repatriated first. So far, however, only few members of the Muslim minority are willing to return.