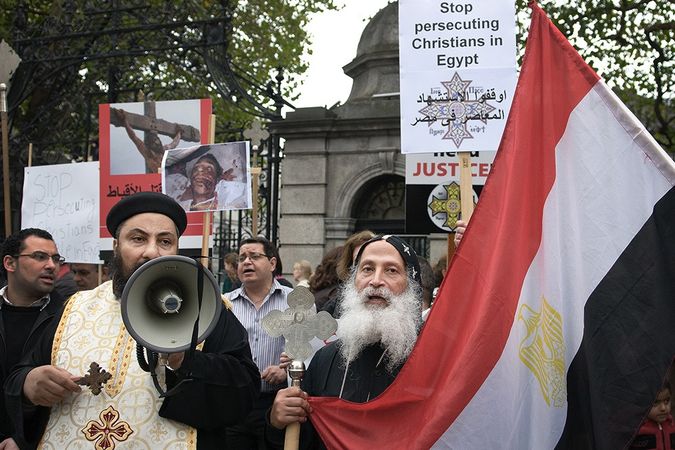 Protest against the persecution of Copts in Egypt. Following recent attacks by radical Islamists, the STP demands better protection for the members of the Christian minority. Picture: Tomasz Szustek/Copt's Protest via Flickr CC BY-NC-ND 2.0

Following recent attacks by radical Islamists against the Coptic population of Upper Egypt, the Society for Threatened Peoples (STP) demands better protection for the members of the Christian minority. “The Copts have to be able to practice their religion freely – even in Egypt’s rural areas – and they must be protected by the state and its security forces,” demanded Ulrich Delius, the STP’s director, in Göttingen on Tuesday. Thus, it is no longer acceptable that the local police tend to ignore calls for help from Coptic communities in the case of imminent attacks by Muslim extremists. The latest attacks are a consequence of the still very complicated and discriminatory laws on the construction of new church buildings. Despite a new law from 2016 that was supposed to facilitate the construction of houses of worship, many Christian villages still have no church. Therefore, believers are forced to use private homes for worship. From the viewpoint of the Islamists, this should not be covered by religious freedom – which is why they use force against the Copts.

Last Sunday, in the village of Demshaw Hachem in the province of Minya, Islamists had stormed, plundered, and set fire to the houses of four Copts. Two Copts and a firefighter were injured. A mob of radical Islamists had attacked the houses because it was suspected that religious services were being held in private rooms. Representatives of the Coptic Church had warned the authorities about a possible attack, but the police did not arrive at the scene until after the pogrom-like attacks.

Meanwhile, 90 people who were allegedly involved in the destruction of the houses have been arrested. However, the STP doubts that the defendants will actually be brought to justice in court. Most of them will most probably be released after a few days, without a trial. “The Copts in Upper Egypt are upset and anxious about the lack of protection by the police. The Christians don’t feel sufficiently protected, and helplessness and fear are spreading,” Delius stated.

Demshaw Hachem is one of the 150 predominantly Christian villages in Upper Egypt. Most people who don’t have a church in their own village don’t dare to travel to one of neighboring villages to visit church services, but attend masses in private homes. “This is a consequence of the state’s failure to adopt practicable laws on the construction of new church buildings. All too often, the Copts are discriminated against – despite the new law, which states that they have to prove how many believers are living in a certain area, and assure that they don’t affect the Muslims,” criticized Delius. “However, the Christians are never asked whether they would feel disturbed by a new mosque.”