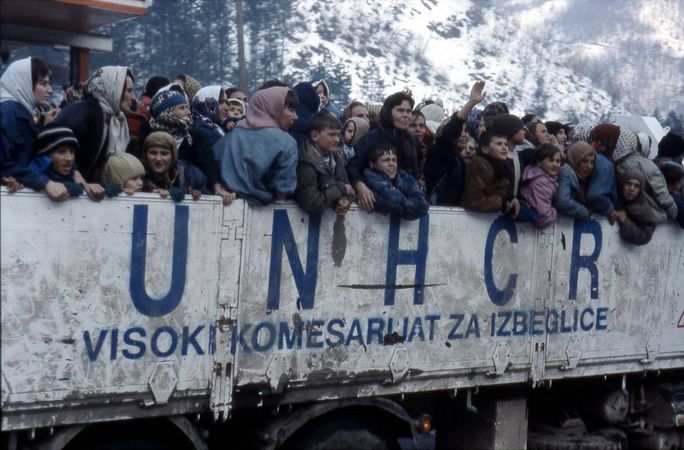 At 10 a.m. on 5 July 2011 the Dutch Appeal Court will deliver its judgment on the appeal filed by Bosnian survivors of the Srebrenica genocide against a District Court ruling that the Netherlands did not fail in its duty of care to their relatives when they were handed over for execution by the Bosnian Serb Army forces commanded by General Ratko Mladic.

Hasan Nuhanovic, a United Nations interpreter who lost his father, mother and younger brother, and Mehida, Alma and Damir Mustafic, wife, daughter and son of an employee of the United Nations Protection Force, hold the Dutch state responsible for the failure of Dutch troops acting under a UN mandate to protect their family members murdered in July 1995.

They are challenging an initial finding by the District Court in The Hague that the United Nations was in effective command and control of the Dutch Battalion ("Dutchbat") and responsible for the fate of refugees offered protection on the UN base at Potocari when the so-called UN "safe area" fell to the Bosnian Serb Army.

Dutch soldiers wearing U.N. blue helmets ordered Ibro, Nasiha and Muhamed Nuhanovic and Rizo Mustafic to leave the safety of the base where they were sheltering and watched on as women and young girls were taken away and raped and men and boys were separated from their families before being taken away for execution.

Hasan Nuhanovic and the Mustafic family allege that the Dutch government was responsible for the actions of the Dutchbat contingent. The plaintiffs' lawyer, the international humanitarian law specialist Liesbeth Zegveld, argues that the Dutch government and the Dutch command within UNPROFOR were aware of the probable fate of the civilians they were handing over to General Mladic but were primarily concerned for the welfare of their own mission.

The District Court decided that Dutchbat were acting under the "command and control" the United Nations, which claims absolute immunity from legal action. The plaintiffs in the civil action argue that evidence shows that the Dutch took decisions outside the United Nations chain of command.

Ratko Mladic, commander of the Bosnian Serb forces, is currently facing trial before the International Criminal Tribunal for the Former Yugoslavia on war crimes charges including genocide at Srebrenica.

Prof. Dr. Liesbeth Zegveld is a partner at Böhler Advocaten, Attorneys, where she is a member of the international law & human rights department. She is professor of International Humanitarian Law, in particular the Rights of Women and Children, at Leiden University.

Hasan Nuhanovic campaigns for truth and justice for the victims and survivors of genocide at Srebrenica and now lives in Sarajevo.