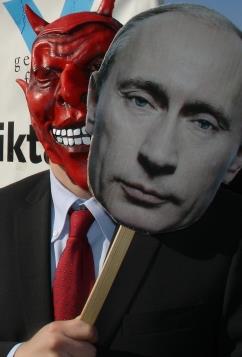 On occasion of the forthcoming visit of the leaders of the African Union (AU) to Russia, the Society for Threatened Peoples (STP) warns about further Russian arms exports to African countries. "Russia's arms exports are fueling the conflicts in Africa," said the STP's expert on questions regarding Africa, Ulrich Delius, in Göttingen on Friday. Recently, Russian helicopters had been used against the civilian population during the war in South Kordofan (Sudan). The exports from Russia are fueling the arms race between the warring states of Morocco and Algeria as well as Uganda and Sudan. "Russia's arms industry relies on more exports to Africa, since the demand from the markets in the Middle East and Asia has continued to decline."

The Russian President Vladimir Putin is planning to use the meeting with the South African politicians and the AU Chairman Nkosazana Dlamini-Zuma – which will start on Saturday and last for three days – to offer arms-export-deals with Russia. "Rather than to show commitment towards peace in the conflict region, Putin will try to secure arms exports to promote the Russian economy," criticized Delius.

In South Kordofan (Sudan), many air-raids are carried out by the Sudanese Air Force by means of Mi-24 military helicopters that were produced in Russia. Sudan has 29 of these heavily armed helicopters – and at least eight of them are being used in South Kordofan. In March of 2012, Sudan also started to use a Russian-made Su-25 fighter in the border disputes with South Sudan. In 2011, Russia delivered six Su-30 fighters to Uganda, although the relations between Uganda and Sudan are very tense.

Since Putin came to power in 2000, Russia's arms exports have more than tripled. In 200, Russia exported military equipment worth 3.7 billion U.S. dollars. In 2012, the total sum had already risen to 15.2 billion U.S. dollars. More than 80 percent of the Russian arms deals are handled by the state company Rosoboronexport. The total number of arms export contracts secured by this company was increased by two and a half times – to 1,309 – from 2011 to 2012.