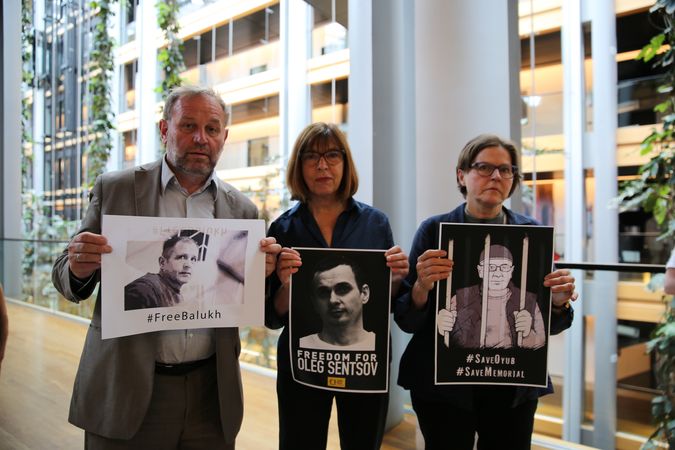 Because he had publicly protested against Russia's annexation of the peninsula, the Ukrainian film director Oleg Sentsov had been arrested in Crimea in May 2014. Photo: Rebecca Harms via Flickr CC BY-SA 2.0

The human rights organization Society for Threatened Peoples (STP) welcomes the fact that this year's Sakharov Prize of the European Parliament goes to the Ukrainian filmmaker Oleg Sentsov. "By awarding the prize to Sentsov, the European Parliament is able to emphasize the importance of supporting human rights activists and minorities in Crimea and Russia," the Göttingen-based STP commented the official announcement on Thursday. "Thus, the award also honors all human rights activists and Crimean Tatars who have been campaigning against Russia's illegal annexation of Crimea for years." The international community should not forget these people.

"It is our aim to make the suffering of the Crimean Tatars more visible to the global public, and to support their demands regarding human rights and self-government," stated Wolfgang Mayr, President of the STP International in Bolzano. A delegation of leading Crimean Tatars is currently paying a visit to South Tyrol (following an invitation by the STP International, the STP South Tyrol, and the Bolzano-based research center EURAC) to gather expert advice on how to implement autonomy, self-government, and minority rights, as has been done in South Tyrol.

According to the human rights organization, the situation of the Crimean Tatars and of persons in opposition to the pro-Russian rulers in Crimea is very worrying. Suppression and persecution affect individuals as well as organizations and institutions. The most blatant example was the ban on the Mejlis, the highest executive-representative body of the Crimean Tatars, in April 2016. The Mejlis was classified as an "extremist organization", leading to a comprehensive ban. The remaining 280,000 Crimean Tatars on the peninsula are still suffering from persecution, discrimination, and intimidation.

Because he had publicly protested against Russia's annexation of the peninsula, the Ukrainian film director Oleg Sentsov had been arrested in Crimea in May 2014. Then, he was brought to Russia, where the Russian law enforcement authorities accused the civil rights activist of planning attacks against Russian institutions. He remains in prison until today, even though the main prosecution witness has meanwhile withdrawn his statement, emphasizing that he had been tortured. Following a month-long hunger strike, which he had to suspend in late September, the filmmaker's health status is still very worrying.