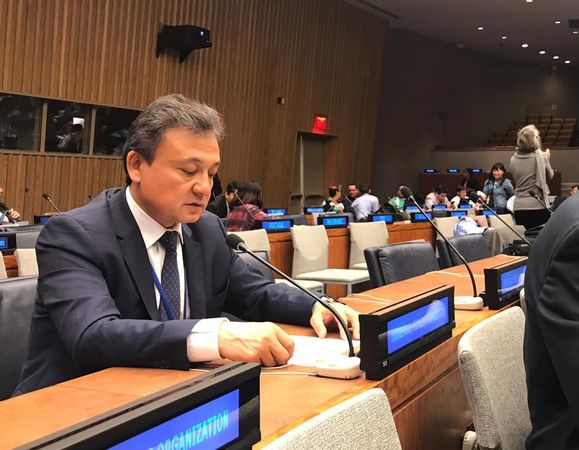 Last Wednesday, Dolkun Isa spoke at the United Nations in New York on behalf of the STP, focusing on the fate of over 1.5 million Uyghurs, Kazakh, and Kyrgyz people whom the Chinese government has detained in re-education camps, where they are systematically brainwashed. Photo: GfbV 2019

The Chinese government is using every opportunity to try and slander human rights activists who dare to mention the re-education camps in the Xinjiang region – as could be seen at the United Nations (UN) in New York yesterday: "A Chinese representative publicly cursed our longtime member Dolkun Isa as a terrorist," stated Hanno Schedler, expert on Genocide Prevention and Responsibility to Protect of the Society for Threatened Peoples (STP), in Göttingen on Thursday. "Representatives of the German and the US government immediately opposed, defending the work of the Uyghur human rights activist."

Dolkun Isa, President of the World Uyghur Congress, attended the Permanent Forum on Indigenous Issues (UNPFII) in New York on behalf of the STP. In his speech, he talked about the fate of over 1.5 million Uyghurs, Kazakhs, and Kyrgyz people who were arbitrarily detained by the Chinese government, and who are now being brainwashed in Chinese re-education camps. "For the Chinese government, all aspects of the Uyghur identity are a threat: our language, our history, culture, and the Muslim religion of the Uyghurs. Our identity is threatened to disappear completely," Isa emphasized in New York yesterday.

In May 2018, Dolkun Isa learned that his mother, Ayhan Memet, had died in one of the now 1,300 camps. "For more than two years, I didn't hear her voice – and I could not meet her for over 20 years," Isa stated. When he finished his speech, a representative of the Chinese government stood up and cursed Isa as a terrorist. Representatives of Germany and the United States opposed. "It is very important that the governments of Germany and the United States will address the situation in Chinese camps at the United Nations in New York. Without an intervention by the international community, the Chinese government will pull though with its cultural genocide, claiming that the camps are merely centers for vocational training," Schedler warned.

The re-education camps were also discussed in the scope of an event at the UN Human Rights Council in Geneva in March this year. Germany had organized a side event with the United States, Canada, the Netherlands, and the United Kingdom. Representatives from Beijing had denounced the event as anti-Chinese, trying to prevent other states from engaging in diplomatic pressure. (Photo: STP)