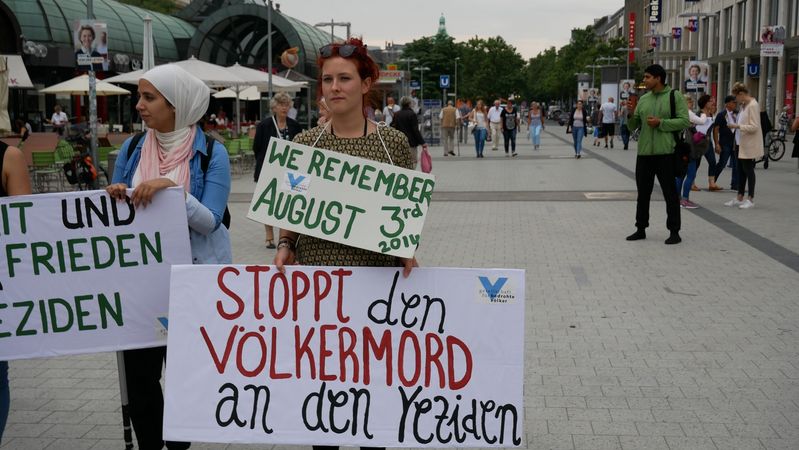 Next Monday, August 3, 2020, will mark the sixth anniversary of the beginning of the genocide against the Yazidi religious community in northern Iraq. In the summer of 2014, the so-called "Islamic State" (IS) began its cruel attacks. Men and boys who refused to convert to Islam were murdered, and more than 6,000 Yazidi women and girls were kidnapped, raped, and sold on slave markets.

On the occasion of the anniversary, Yazidi associations in Germany and all over the world will commemorate the victims of the genocide. "On August 3, we will commemorate the incredible suffering that took place six years ago. The family members of the victims of the mass killings and enslavement are still traumatized. Today, the Yazidi people still become victims of expulsions and still live in great insecurity," stated Lina Stotz, STP expert on ethnic, religious, and linguistic minorities and nationalities.

Hundreds of thousands of Yazidi refugees are waiting to return to their homes in the Sinjar region in northern Iraq. They have been living in refugee camps for six years. However, a return would be dangerous at the moment: Turkey carried out air strikes in the region in June, allegedly against PKK positions. "But civilian targets were attacked as well, including refugee camps where Yazidi refugees live. The bombing of genocide survivors is not only a serious threat to them – it also strengthens the Islamic State, which is still active in the region," Stotz added. The Iraqi government and the international community must urgently provide security and initiate reconstruction in Sinjar, to ensure that the refugees will be able to return. According to Stotz, the German government is obliged to at least condemn Turkey's actions.

"A further burden for the community is that thousands of women and children are still in IS captivity," Stotz reminded. "Almost 3,000 Yazidis are still in the hands of their captors. In addition, there are probably hundreds of children who were conceived in rape." These women and children are in urgent need of help: They need to be brought to safety and given humanitarian and psychological care. Here too, the international community has a duty.