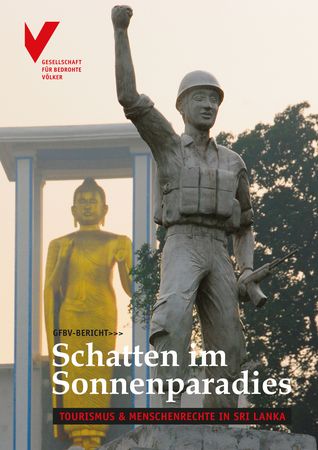 The Society for Threatened Peoples Switzerland (STP) has published a new report called "Dark clouds Over the Sunshine Paradise" that documents how the tourist development in Sri Lanka leads to systematic human rights violations. Thus, the local population is often not informed about planned tourism projects adequately, if at all. In the regions under consideration, more than 1,200 families are immediately affected. The STP therefore calls on the German and Swiss tour operators to acknowledge their responsibility for human rights issues.

In 2014, more than 1.5 million tourists from abroad visited Sri Lanka. Following Great Britain, the second largest group of tourists from Western Europe was from Germany – with 102,977 individuals. Switzerland follows on fifth rank. Six years after the civil war, the Sri Lankan government is trying to paint a picture of a country that has returned to normal, but reality is different.

The report examines the three newly developed tourist regions of Kuchchaveli, Passikudah and Kalpitiya, trying to find out whether there are any human rights violations related to tourism projects – and to what extent. The results are disillusioning: In the examined regions, the hotels and resorts often keep fishermen away from the sea, jeopardizing the economic livelihood of many families. Further, there are cases of land expropriation. Only a small part of the local population is able to live off tourism.

Despite the troubling human rights record, there are at least 49 German and 21 Swiss travel agencies that offer hotels in the regions under concern. The STP is aware of the fact that there are individual travel providers that show voluntary efforts to improve their compliance with human rights provisions, but the report clearly shows that these efforts are not enough to make up for the lack of consultation procedures, for land expropriation, forced resettlement and restricted access to the sea in Sri Lanka.

Therefore, the STP demands that

Furthermore, the STP calls on the new Sri Lankan government to revise its tourism strategy, to enforce the existing laws and regulations, and to protect the population, including all minority groups, from human rights violations. Sri Lanka is dependent on an economic development based on tourism, but this cannot justify human rights violations, land expropriation or forced evictions. Now, travel providers must take a second look and be aware of their responsibility towards the human rights situation in Sri Lanka.

The detailed report can be downloaded here.