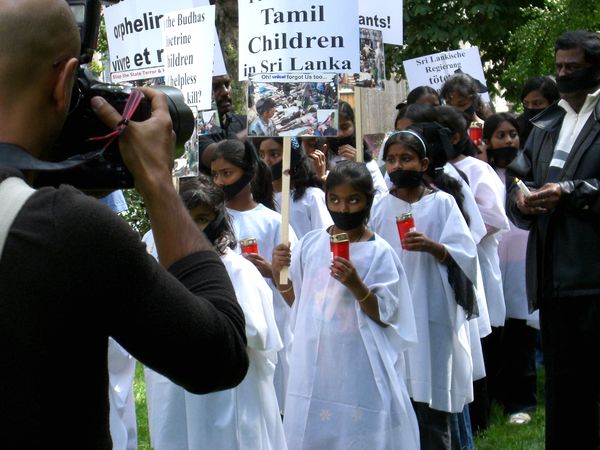 Following the election of Gotabaya Rajapaksa as president of Sri Lanka, the Society for Threatened Peoples (STP) fears more ethnic and religious tensions and more human rights violations in the island state. "This is a black day for human rights. The former Minister of Defense was responsible for war crimes and crimes against humanity in the brutal crackdown on the unrest in 2009. His victory is also a victory of impunity, as he will try to thwart attempts to bring his war crimes to light," emphasized Ulrich Delius, the STP's director, in Göttingen on Sunday. Now that the Buddhist Sinhala nationalist was elected president, the ethnic and religious minorities of the country will have to fear for their rights and their status – and his election is also a bad omen with regard to the freedom of press, the freedom of assembly, and other human rights. Following first projections, Gotabaya Rajapaksa had declared himself the winner on Sunday morning, and India's prime minister has already congratulated him on the electoral success.

The human rights organization demands the new president of Sri Lanka to do everything in his power to pacify the country, as the election campaign had caused serious tensions, mainly between the Sinhala majority and the Tamil minority, but also affecting the Muslims and Christians. For many Tamils, Rajapaksa stands for disenfranchisement and violent repression. "This is not a victory of peace – and it will not give Sri Lanka more stability. Large parts of the Tamil population consider Rajapaksa an oppressor and a mass murderer. His victory will reopen old wounds of the civil war," warned Delius.

The human rights organization also warned that Gotabaya's victory will further increase China's influence. For years, the People's Republic has been trying to force the island state into increasing debt by means of controversial large-scale projects. The previous government had tried to reduce China's growing influence.