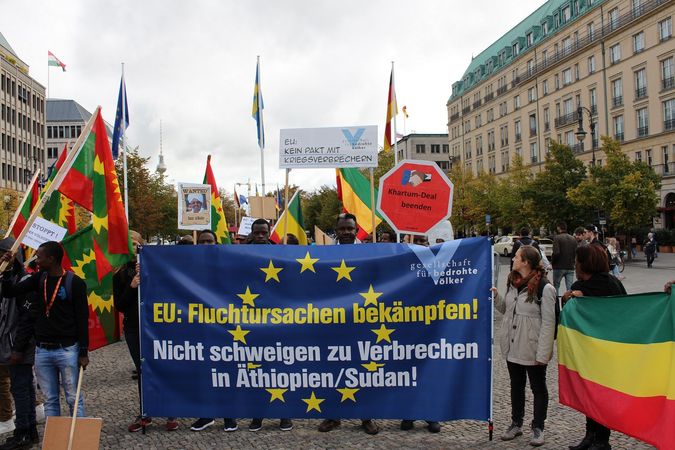 STP-Demonstration against the cooperation of the EU with Sudan regarding the refugee question, Photo: STP

The Society for Threatened Peoples (STP) has demanded the European Union (EU) to reassess its cooperation with Sudan regarding the refugee question. Prior to this, it had become known that a Sudanese militia group, which is notorious for its human rights violations, has arrested about 1,500 refugees on their way to Europe since May 2016. They were then handed over to the Sudanese authorities to have them sent back to their home countries, where many are facing torture, inhuman treatment, and even execution.

“If the EU is to stick to its cooperation with Sudan in migration questions – even though this means that a gang of murderers and rapists is hunting down political refugees – it must at least be ensured that the refugees will not be handed over to their persecutors,” explained Ulrich Delius, the STP’s Africa-expert, in Göttingen on Wednesday. Sudan has sent about 1,000 militia officers of the Rapid Support Forces (RSF) to the Libyan border to put an end to the trafficking. The RSF officially report to the Sudanese National Security Service (NISS). With about 6,000 fighters, they are regarded as the successor organization of the Janjaweed militia in Darfur who are responsible for the destruction of 5,000 villages since 2003.

At a press conference in Khartoum last Sunday, the RSF reported that they had handed over 115 refugees to the Sudanese Ministry of the Interior to have them sent back to their home countries. The RSF commander, Mohammed Hamdan Dagolo, estimated that about 1,500 refugees from Eritrea, Ethiopia, and Somalia were arrested during the past seven months. In his opinion, the sanctions imposed on Sudan because of human rights violations should be lifted.

“With its ruthless actions against refugees, Sudan is obviously trying to consolidate the cooperation with Europe. However, deportations to Eritrea and Ethiopia are to be seen as violations of Article 33 of the Geneva Convention on Refugees, which Sudan signed in 1974,” Delius criticized. “Those who refuse to protect the persecuted Oromo and Amhara from Ethiopia and the Eritrean refugees are guilty of serious violations of international law.” In 2016, the EU promised the dictatorial regime of Sudan 140 million Euros for projects aimed at keeping refugees from reaching Europe.