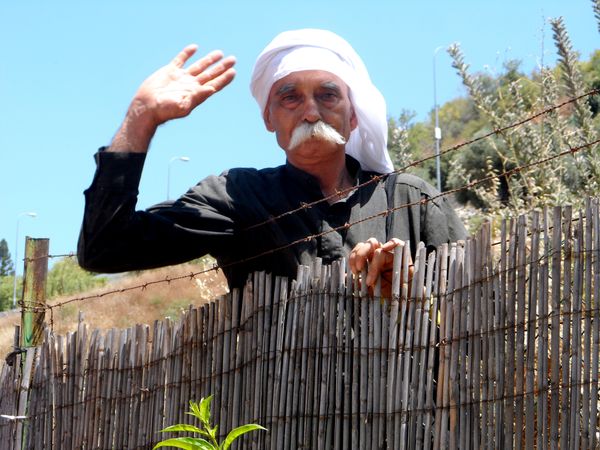 Kamal Sido, the STP’s Middle East consultant, visited Israel for two weeks and met Orthodox Jews, fasting Palestinians and good-humored Armenians. But he wanted to see more: He paid a visit to northern Israel to get to know the religious minority of the Druze and get an impression of their everyday life close to the border to Syria.

The Israeli sun burned down on me when I got off the train in Nahariya on July 16, 2015. I had come from Tel Aviv. At the train station, I was met by a smiling 80-year-old man: Jamal Ali would be my guide for the next two days. I had come to Nahariya to get to know the religious community of the Druze who live in the region – and I wanted to find out what they think about the more than tense situation in the Middle East. Two months ago, in June 2015, the Druze community had gotten attention because of dreadful incident: Radical Islamists of the Al-Nusra Front and their allies of the Syrian Islamist opposition had killed 20 Druze in northwestern Syria. The massacre took place in the mountain region “Simaq” in the province of Idlib, which counts 17 Druze settlements with more than 30,000 inhabitants.

A Muslim denomination or an independent religious community? The faith of the Druze

Jamal Ali, my guide in Nahariya, belongs to the Druze people. He is from Peki'in (“Al-Buqia” in Arabic), an Israeli-Druze town in Galilee with about 5,500 inhabitants. Altogether, there are about 125,000 Druze living in Israel, most of them in the north of the country. Their native language is Arabic and they see themselves as members of a Muslim denomination. However, there are outsiders who do not share this view: “The Druze are a sect and have nothing to do with Islam. They don’t pray, they don’t fast and they don’t go on pilgrimages to Mecca...“ is how a reader commented on an article published by Al Jazeera, in Arabic, titled: “Who are the Druze, and how do they get along in the troubled Middle East?”

Jamal Ali is proud to be Druze – and he is one of the best travel guides you could imagine.

The Druze call themselves “al-Muwahhidun”, meaning that they are monotheists who believe in the uniqueness of God. This Arabic term is attributed to several Muslim groups. Another name the Druze have for their own religious community is “Bani Maaroof”, originally meaning that they are descendants of the “People of God’s Deeds”. Nowadays, the term is used as “People of Good Deeds”.

Although the faith of the Druze is strongly influenced by Shia Islam, especially of the Ismaili tradition, there are so many differences that the Druze can be seen as an independent religious community – not so much as a denomination of Islam. The Druze interpretations of the Koran are often quite different from the Sunni or the Shiite faith. Further, they believe in the transmigration of souls, which is something that usually does not belong to the Muslim faith. As the Druze firmly believe that everything is ordained by God, they categorically reject proselytizing or conversion. Thus, one can only be born as a Druze; there is no other way into the religious community. In this respect, there are similarities between the Druze and the Yazidis, the Ahl-e Haqq and the Zoroastrians, who live in today’s Kurdistan or in Iran.

In the Druze-Israeli territories, the colorful flags of the Druze are often to be seen fluttering proudly in the wind next to the flag of Israel. Together, the two flags symbolize the identity of the religious minority.

A Druze by heart – an Israeli citizen by constitution

Just as the Yezidis, the Zoroastrians and the Ahl-e Haqq, the Druze people have settlements in more than one country. Outside of Israel, there are about 700,000 Druze living in Syria, 280,000 in Lebanon and a very small number in Jordan. In contrast to the threatening situation for the Druze in Syria and Lebanon, their Christian brothers and sisters in Israel feel quite safe: The five-color Druze flag is to be seen on many rooftops. In Syria, this would not be possible without problems. In Israel, the Druze are able to practice their faith openly – which they do, demonstrating confidence as well as their loyalty to the state of Israel. Like all Israeli citizens, they do their military service when they turn 18. Israel is one of the few countries in the world in which the military service is mandatory for all citizens. Women have to serve in the army for two years, the men for three years. The only exceptions from this regulation apply to ultra-Orthodox Jews, to pregnant, married and non-Jewish women as well as to Israeli Arabs. For the Druze, however, there is no exception. Thus, it was not surprising that some of the Israeli soldiers I met in the streets of Jerusalem were Druze. “There are a few conscientious objectors among the Druze, but the vast majority is proud to belong to the state of Israel,” I was told by a Druze in Nahariya, whom I had addressed in Arabic.

When I travel, I simply approach people in the streets. This way, I am able to gather lots of unofficial information and to make new friends, such as this Druze policeman.

I learned more about this loyalty to the State of Israel, when I visited a retired Israeli-Druze military officer at home. While we had breakfast and drank mate tea (an infusion drink from South America), he told me about other senior officers in the Israeli army who belong to the population group of the Druze. We even talked about the Druze people in Syria being threatened by radical Sunnis. All Druze are aware of the precarious situation of their brothers and sisters in the neighboring country. Many of them have direct relatives or friends on the Syrian side of the border. The Druze would do anything in their power to help their coreligionists in Syria, the officer assured.

Brothers in war-times and in peace: The Druze in Israel and Syria

The retired officer was not the only person I spoke to about the situation of the Druze and other minorities in Syria. Even the spiritual leader of the Druze in Israel, Sheikh Muwaffak Tarif, told me about his efforts to protect the Druze in Syria. Being the spokesman and representative of all Israeli Druze, he regularly meets with representatives of the Israeli government and with diplomats from America and Europe. His authoritative position is based on a longstanding Druze tradition that combines democratic rights and birth privileges: A spiritual Druze Council – consisting of the al-Sais’, the religious leaders of the villages and areas – chooses a leader from among the sons of the Druze sheikhs. Subsequently, however, the Israeli government has to formally acknowledge the decision.

While having tea and delicious pastries, I spoke to Sheikh Muwaffak Tarif about Syria and the everyday life of the Druze people living along the border. Jamal Ali was there too.

My conversations with the Druze people reflected the complex situation in the Middle East: The pro-Iranian Shiite Hezbollah militia in Lebanon has joined the Syrian regime in its efforts to fight the opposition. Israel, in turn, has a direct interest in weakening the Hezbollah militia – which is why many Druze, especially those who live on the Golan Heights, believe that Israel is supporting the Syrian rebels. Officially, Israel contradicts this assumption; but it was admitted that wounded Syrians are treated in Israeli hospitals for humanitarian reasons, which seems to be based on the principle that an enemy of an enemy is a friend. It is a fact that the armed Syrian opposition is infiltrated by radical Islamists, who are supported – or at least tolerated – by Sunni powers such as the Arab Gulf states, by Turkey and by some of the Western governments. A the end of May, the Arabic Qatari television channel Al Jazeera had featured Abu Mohammed al Golani, the leader of the Al-Nusra Front. The Al-Nusra Front, which belongs to al-Qaida, is fighting against the regime of Bashar a-Assad in Syria. Al Jazeera treated Golani as a head of state and gave him the opportunity to elaborate on his views for several hours. The Islamists leader announced “revenge campaigns against everyone who attacked the Sunnis”. He also urged all non-Sunnis to convert to “the true Islam”.

The Druze, Christians, Ismailis, Shia and other non-Sunni minorities fear that the armed Syrian opposition might prevail – and these fears are justified. Almost all of the armed groups, not only the Al-Nusra Front and the barbaric “Islamic State” (IS), are fighting for the introduction of a Sharia law, the “Islamic law” in Syria. Since the minority groups would hardly be able to live in a Sharia state, it is no surprise that the 300,000 to 700,000 Syrian Druze reject the Islamist opposition in Syria. However, the Druze who live in the Golan Heights, which Israel annexed from Syria in 1967, have their own views about what is going on in Syria. Most of the approximately 20,000 Druze in the Golan Heights do not believe in a “Syrian revolution”, but some of them would favor a change of regime in Syria. They believe that the radical Islamists will not be able to rule Syria for long and hope for the rise of a democratic government system that respects the rights of all Syrian citizens.

On occasion of the Iftar, the evening meal during Ramadan, many faithful Muslims visit the Dome of the Rock in Jerusalem to eat together.

These hopes are very deceptive. What I learned from my conversations with Arabs and other Sunnis in the courtyard of the Al-Aqsa Mosque and at the Dome of the Rock on the last day of the Islamic fasting month in Jerusalem, suggests a different picture. Many Sunnis still believe that a Sharia state could “save” the Islamic world.

Clearly, dictators such as Bashar al-Assad must be fought, in any case – but a radical political Islam is not an alternative to regimes like this. It is wrong to support Islamist fighters in order stop dictatorships or civil wars. Almost everyone I talked to during my visit to Israel agreed to this, whether they were Druze, Syrian Orthodox, Armenian Orthodox or Jewish. Only a multi-ethnic and multi-religious state system can guarantee human rights and minority rights. Minority groups such as the Druze must be free to decide who they are and how they want to live.

KAMAL SIDO is the Middle East consultant of the STP. He is in direct contact with different ethnic and religious minorities in the Middle East and their exile organizations abroad. From time to time, he visits the region himself in order to learn more about the current situation.