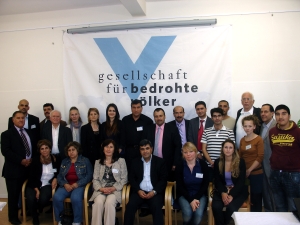 Germany and the states of the European Union should be involved in drafting a new constitution for Syria and provide support by hosting a national conference in the own country. This hope is shared by the representatives of eleven Syrian-Kurdish parties and organizations in German exile. Following an invitation of the Society for Threatened Peoples (STP), they came together for a weekend in Göttingen to announce their expectations. In an unanimously approved resolution, they demanded that a new Syrian constitution must assure the national rights of the Kurds and the cultural rights of ethnic and religious minorities like the Assyrians, Syrians, Armenians, Druze, Ismaili Muslims, Baha'is and other minorities. In addition, the Kurdish Yazidis would need to be recognized as an independent religious community and the equality of women should be declared.

In order to finally overthrow the Assad regime in Damascus, the conference participants called for a further tightening of sanctions: All oil imports from Syria to the EU should be stopped immediately. It was clearly warned not to trust the Syrian-Arabic Islamist opposition or Turkey as mediators because they might try to obstruct the constitution of democratic rights in the country, especially for Kurds. In the region, Turkey is mostly seen as an "Islamic-Sunnite protecting power".

Since mid-March, the Syrian regime is fighting against peaceful protest with undiminished brutality. At least 2600 protesters got killed and nearly 20.000 were injured since. More than 20.000 opposition activists were arrested and about 11.000 Syrian citizens have fled to Turkey or Lebanon. Since last Friday alone, 77 Syrians were killed.

Also, the Kurds and representatives of the Christian-Assyrian national movement are taking to the streets almost every day since mid-March, to demand democratic, peaceful and internationally observed changes in Syria.

According to the President of the International Society for Threatened Peoples, Tilman Zülch, there have not yet been any mass-demonstrations in the two main centers, Damascus and Aleppo, because the Islamic opposition has not sufficiently expressed their view of the political future after the overthrow of the dictatorship.

The resolution adopted at the conference can be found here.