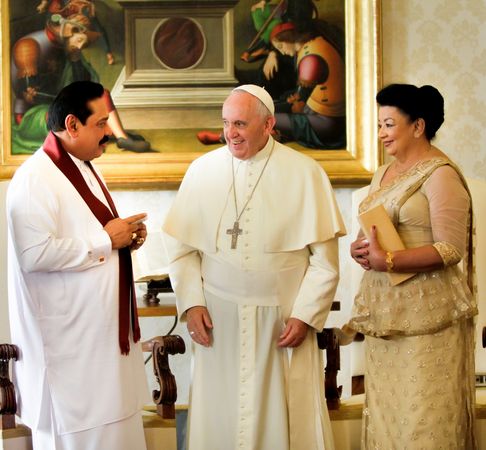 The Society for Threatened Peoples (STP) accuses Mahinda Rajapaksa, the authoritarian President of Sri Lanka, of trying to instrumentalize the upcoming visit of Pope Francis for his re-election campaign. In Christian-inhabited areas, Rajapaksa is to be seen on election posters with a picture of him and his Catholic wife at a reception with the Pope. Thus, the president is trying to convince the country's Christina minority (which is predominantly Catholic) that he has the support of the Holy Father. Christians make up about ten percent of the 21 million inhabitants of the country, while the majority is Buddhist.

"It can not be in the interest of the Pope to help re-elect a despot who is known for nepotism, for his abuse of power, lack of respect for human rights and for the exclusion of religious minorities," said the STP's Asia-consultant, Ulrich Delius, in Göttingen on Monday. "We regret that the Pope did not reschedule his visit when the date of the elections became known." They will now take place on Thursday (January 8). Catholic leaders from Sri Lanka had asked the Pope to postpone his visit, but to no avail. The spiritual leader is expected in Sri Lanka on January 13.

"For Pope Francis, this will be the most difficult trip abroad. The Buddhist nationalists are watching his visit with suspicion and have already warned about possible statements in favor of religious minorities and demanded the Pope to apologize for 'crimes committed during the colonial period'" said Delius. "But if the Pontifex Maximus wants to remain credible, he must not remain silent about the increasing marginalization of smaller religious communities and the growing number of attacks against Muslims and Christians." The Buddhist movement Bodu Bala Sena – which is led by the President's brother – is largely responsible for the nationalist incitement.

The incumbent President Mahinda Rajapaksa is controversial because he placed family members in important government offices and because he extended his powers through a constitutional amendment, allowing him to strive for a third term in office. He is also accused of doing nothing to further reconciliation between the Sinhalese and the Tamil population or to protect suspected war criminals from prosecution – even after three decades of civil war. Further, he has managed to bring the media into line as far as possible, so critical journalists must fear to be prosecuted.

Rajapaksa's re-election seemed more or less certain for quite a while. However, after several ministers had resigned from office and after the Tamil and Muslim parties called to support the opposition candidate Maithripala Sirisena, civil rights activists are hoping for an electoral setback for Rajapaksa and for a new democratic beginning.