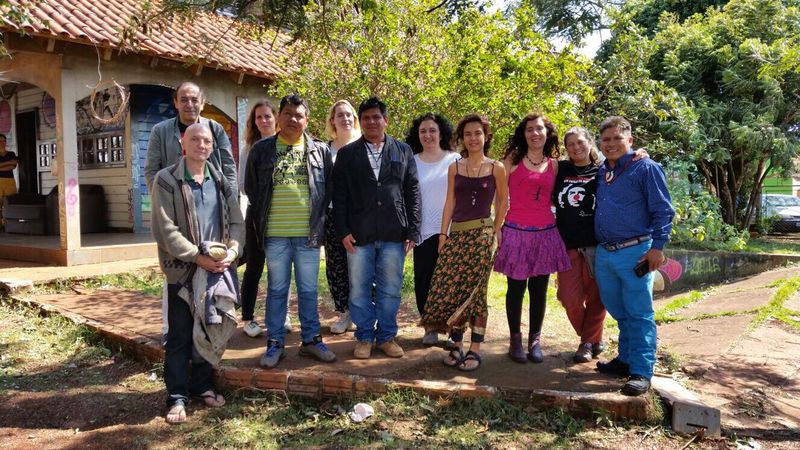 The delegation from Europe will take part in a meeting of the Aty Guasu Council, the great assembly of the Guaraní-Kaiowá. Photo: Private/GfbV

Human rights activists from Europe are helping the indigenous Guarani-Kaiowá, who live in the state of Mato Grosso do Sul and who feel left alone by the Brazilian government, to defend their land against powerful agricultural companies. On Monday, the Society for Threatened Peoples (STP) announced that it will be sending two honorary delegates to join an observatory group consisting of members from six European countries. Together with the Guaraní-Kaiowá High Council, they will develop strategies for an international network to support indigenous peoples.

“It is a scandal that the Guaraní-Kaiowá might not be able to live off their land any longer because economic interests are given priority over human rights – and because the state doesn’t try to stop murder, intimidation, and abductions by hired muscle,” criticized Yvonne Bangert, the STP’s expert on questions concerning indigenous peoples. In many areas, big landowners are growing sugar cane and soybeans or keeping livestock on stretches of land for which the indigenous peoples have land titles. “When the displaced indigenous people try to return to their land, they are ruthlessly driven away. They often have to live in temporary shelters along the roadside.”

The delegation from Europe will take part in a meeting of the Aty Guasu Council, the great assembly of the Guaraní-Kaiowá. Together with a group of indigenous leaders, the human rights activists will be visiting temporary shelters of displaced persons along the roadsides, traditional Aldeias (villages), reclaimed land, and a place where the bodies of indigenous activists (who had been considered missing) were found recently. According to the human rights organization of the Catholic Indigenous Missionary Council (CIMI), 36 people got killed in violent conflicts in Mato Grosso do Sul in 2015 alone, most of them members of the Guaraní-Kaiowá. Many leaders were killed, and several settlements were destroyed. In its current annual report, CIMI describes ten such incidents in detail.

With about 50,000 members, the Guaraní-Kaiowá in Mato Grosso do Sul are one of Brazil’s largest indigenous peoples. They are suffering great hardship because, without land of their own, they no longer have access to pastures, water, and sufficient cultivation areas. Many of them are living on poor quality food aid provided by the government, or they are forced to work on large farms, where they often end up in a cycle of wage slavery. In order to survive, they have to borrow money from their employer – and, since they don’t earn enough to pay off their debts, they have to ask for more loans, so they become more and more indebted.