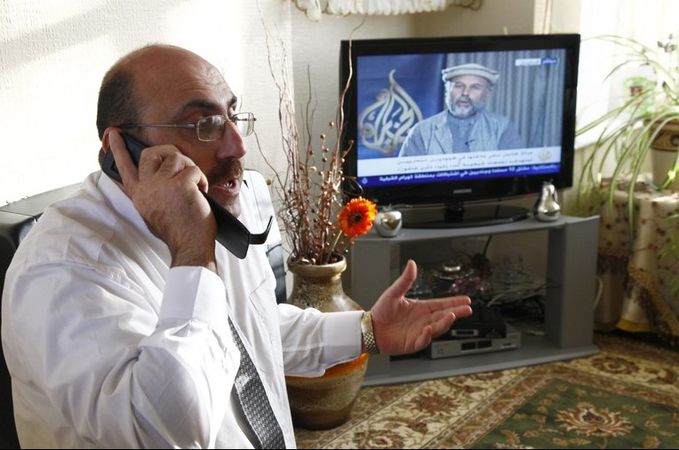 The SOHR is an organization located in London. It collects and publishes information about violation of human rights in Syria. In North Syria, there are three areas which are mainly populated by Kurds: Kobani, Jazira and Afrin. Resisting the Assad regime in Damascus and the Islamic opposition, these areas have been declared to be autonomous.

STP: After the capture of Til Abyad and the expulsion of the “Islamic State” (IS), the Kurdish People’s Protection Units (YPG) is accused of “ethnic cleansing” against the Turkmen minority group and the Arabic Sunni population. What goals are the Kurds pursuing regarding this “ethnic cleansing”?

RA: There’s no “ethnic cleansing” in Til Abyad against the Turkmen and Arabic population. If the YPG would have wanted to expel Arabs and Turkmens, it would have done so already during the liberation of the villages. Nevertheless, it happens that – in case IS has been expelled – inhabitants are being asked to not go back to their villages immediately because of mine danger. In some villages, like in Dogan or Al Bajela, the inhabitants were prevented from returning to the villages for a longer period of time because IS fighters were still expected to be in the villages.

STP: The allegations concerning the “ethnic cleansing“ are coming first and foremost from Turkey and the Syrian coalition. Why?

STP: Did the YPG conduct „ethnic cleansing“ in other regions, perhaps in the east of Til Abyad in Qamishli, at earlier stages?

RA: I haven’t heard of such cases. There are dozens of Arabic villages near Qamishli, further east. The Arabs are still living there and are also protected by the YPG. Indeed, there are civilian casualties in the fights between YPG and IS, but there’s no specific and systematic persecution on account of a certain religion or ethnicity by YPG.

STP: Are Arabic, Assyrian-Aramaean or Armenian residents being persecuted in the YPG dominion?

STP: Are you familiar with other ethnic or religiously motivated persecutions by the administrations of the cantons of Afrin, Kobani or Jazira?

STP: The YPG is accused of the recruitment of people under the age of 18. What do you know about this?

RA: We observe the behavior of the YPG in this matter very closely. From time to time recruitments of minors are being reported. But these are usually individual cases. In these cases, the public authorities in the cantons are talking about “tahil” (rehabilitation). For example: When minors run away from their families for various reasons and are taken up by the authorities of the cantons. But because there are no clear boundaries between the different public authorities, the YGP or the PYD (Partiya Yekitîya Demokrat/ Democratic Union Party) are being accused of recruiting minors. Anyways, the public authorities of the cantons explicitly request the drawing of clear boundaries. Minors should not be recruited. Besides, we are against a forced recruitment of adult people, too. The fight against IS should be led only by volunteers. Regarding this issue, we are in a current debate with the autonomous public authorities in Afrin, Kobani and Jazira.

STP: There are existing conflicts between the PYD and the Kurdish National Council (KNC). What can you say about these conflicts?

RA: Again and again the KNC complains that KNC followers are persecuted by the public authorities in the cantons. Regarding this question one fact should be noticed: The PYD and the KNC are political rivals. The KNC cooperates closely with the Syrian Coalition (based in Istanbul) and does not want to acknowledge the existence of the public authorities and the cantons. We condemn every form of persecution based on political views.

STP: Why does the Government of Turkey “prefer” to have IS as a neighbor instead of Kurds, more specifically the PYD and the YPG?

RA: The Turkish government fears a strengthening of the Kurdish position in the region as I have already mentioned. Because of that they tolerate and even support the “Islamic State”. Without the support of the Turkish government, IS would not have become what it is today. Approximately 50.000 jihadists from all over the world arrived in Syria and Iraq via Turkey. There is photo and video footage which clearly proves the cooperation between IS and the Turkish government.

STP: Does the PYD in North Syria want to establish a purely “Kurdish state”? Or do they merely want to have self-government?

RA: To our knowledge and according to official announcements of the YPD and the PYD they don’t want to establish a separate state. They want a democratic, not centralistic, pluralistic, ethnically and religiously diverse Syria.

By the way [jokingly]: “Only Allah knows what’s hidden in the hearts.” Well, I am not a clairvoyant. I am not able to say what will happen in the future.

STP: Should the international community support the three cantons in Afrin, Kobani or Jazira? If yes, then why?

RA: Yes, in any case. That’s one of our main demands for Europe and the international community. Within the Syrian chaos, people need a perspective. And the cantons in North Syria are such a perspective. People in Syria have to see examples for a peaceful togetherness in their own country. And North Syria could become an example for whole Syria.