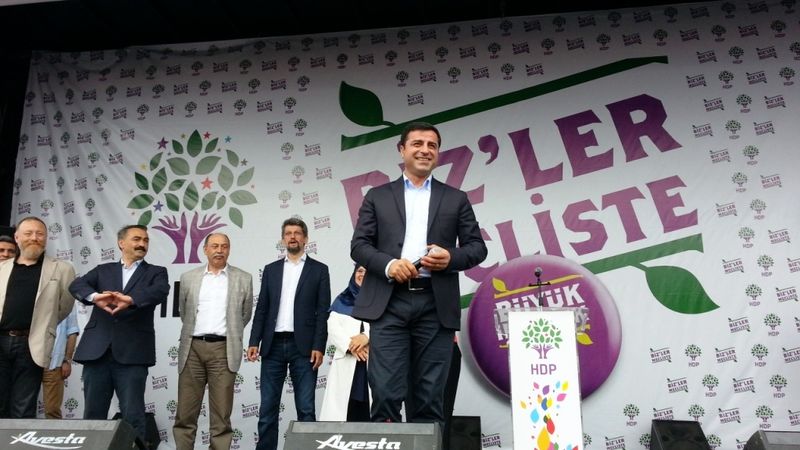 The HDP decided to nominate its former chairman Selahattin Demirtas for the presidential elections. Photo: Hilmi Hacaloglu/ Voice of America via Wikimedia Commons

This Friday, the Society for Threatened Peoples demanded that the German Federal Government should advocate for an immediate release of the Kurdish presidential candidate Selahattin Demirtas, who is currently imprisoned in Turkey. The HDP, a pro-Kurdish opposition party, decided to nominate its former chairman for the presidential elections on June 24 – as an opposing candidate against current President Recep Tayyip Erdogan. “It is high time to reassure the Kurdish people in Turkey in their peaceful efforts towards more democracy. This could be done by supporting Selahattin Demirtas,” emphasized Kamal Sido, the STP’s Middle East Consultant, in Göttingen on Friday. The HDP has always tried to focus on a political dialogue between the Turkish government and the Kurds, while Erdogan is relying on an authoritarian rule and on repression. He has been stepping up the measures against the fighters of the Kurdish PKK since the summer of 2015. When, in the same year, the HDP achieved notable successes in the parliamentary elections (so that Erdogan could no longer rule on his own) he had several of their delegates put on trial – including Demirtas.

The popular Kurdish politician is facing charges of terrorism, which could lead to up to 142 years in prison. He has been in prison since November 3, 2016. As a politician and personally, he is committed to the freedom of religion of the Christians, the Alevis, and the Yazidis – as well as to the linguistic, political, and cultural equality of the approximately 15 million Kurds and the smaller ethnic groups in Turkey. His wife Basak and the daughters Delal and Dilda are waiting for him to be released.

“There are press reports that the Islamist AKP party has become nervous due to Demirtas’ nomination – showing that Erdogan can’t rely on being able to govern alone,” Sido stated. “It must be in the interest of Germany and Europe to support democratic movements in Turkey – and to advocate for a peaceful coexistence of the different ethnic groups.”

However, the elections in Turkey will probably not meet democratic standards. The country has been under a state of emergency since July 2016. More than 7,000 HDP members, executive employees, and elected representatives were arrested. In total, more than 100,000 people were arrested in Turkey over the past two years, including mayors, parliamentarians, writers, and scientists. At least 120,000 civil servants, prosecutors, and judges were dismissed – and about 2,000 educational institutions and nearly 200 media were closed down, including 15 Kurdish media. At least 149 journalists are currently in prison, and members of the religious and ethnic minorities such as the Alevis, Yazidis, Christians, Armenians, Assyrians/Aramaeans, and the Greeks are being oppressed.