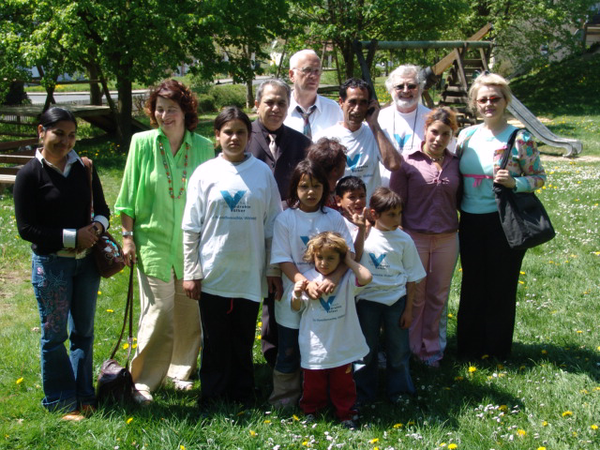 Jasna Causevic, head of STP’s South-East Europe department, with the members of a Roma family in 2006, who have been lead-poisened in a refugee camp. Photo: STP's archive

The Society for Threatened Peoples International (STPI) has sent an urgent appeal to UN Secretary-General Antonio Guterres, demanding compensation for the Roma, Ashkali, and Kosovo Egyptians who suffered severe health damage because they had to live in contaminated refugee camps provided by the United Nations (UN) in Kosovo in the period of 1999 to 2006. “The UN cannot escape its responsibility for the health and the lives of the refugees, as this would seriously damage the UN’s image,” the human rights organization warned on Thursday. So far, the UN has refused to grant the minority groups compensation, although the Human Rights Advisory Panel (HRAP) of the UN Mission in Kosovo had recommended to do so. Following the NATO intervention in Kosovo, several hundred Roma, Ashkali, and Kosovo Egyptians had found shelter in five lead-poisoned refugee camps in northern Mitrovicë / Mitrovica. At least 192 Roma – among them many children – were seriously affected by the high lead levels and are still struggling with the consequences. The refugees are sure that several deaths were caused by lead poisoning as well.

“The UN must finally ensure that the affected Roma families will be treated, either in the United States or in Europe,” the STP demanded. “We have repeatedly warned about serious health problems – and we sent a fact-finding mission to the area at the end of October 2005, led by the German environmentalist Klaus-Dietrich Runow. Most of the people who were tested (66 hair samples) showed lead values between 200 ?g /g and 1200 ?g /g – which, according to Runow, were supposedly the highest lead values ever measured in hair samples (reference value: ?1?g /g). In addition, there were extremely high arsenic and cadmium values.

After noticing the contamination of the area around the barracks in “Osterode”, the UN had advised the Kosovo troops (KFOR) stationed there to refrain from outdoor sporting activities. French soldiers reported that military doctors had advised them not to father a child during the first nine months after their return. The troops were relocated – and the site was used as a refugee camp for 593 displaced Roma, Ashkali and Kosovo Egyptians. The German federal government had provided 500,000 Euros to transfer the refugees to the former barracks.

Now, the UN is planning to establish a fund to ensure medical and economic support for the Roma, the Ashkali, and the Balkan Egyptians in North Mitrivicë/Mitrovica, in South Mitrovicë/Mitrovica, and in Leposavi? – and there are plans to improve the infrastructure in the settlements of the Roma communities. “This consolation is simply not enough to compensate the poisoned Kosovo Roma,” the STP criticized. “Humanitarian aid must not become a substitute for justice and reparation!”

Here you can find our letter to the UN Secretary-General: Letter to the Secretary General regarding his statement on the Human Rights Advisory Panel’s recommendation on Kosovo regarding N.M. and others vs. UNMIK. (pdf)