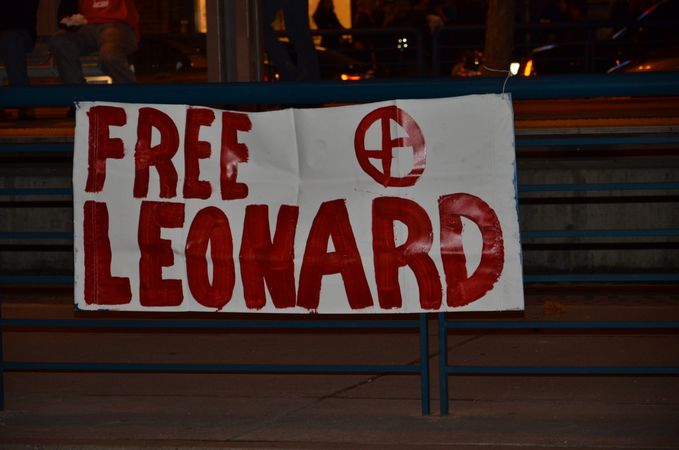 On Wednesday, the Society for Threatened Peoples (STP) sent an urgent appeal to US-President Barack Obama, asking him to use this year's traditional "Christmas Pardon" to release the seriously ill imprisoned Native American civil rights activist Leonard Peltier. "Please alleviate the situation of the seriously ill 70-year-old," the Göttingen-based international human rights organization appealed to Obama. "Almost 40 years in prison are enough for this poor old man who is not guilty of the charges laid out against him! Please don't let him to die in his cell. Let him spend his remaining years in freedom!"

"We hope that President Obama will consider our request with special care," said Yvonne Bangert, the STP's expert for questions concerning indigenous peoples, on Wednesday. "None of his predecessors showed as much interest in the living conditions of the Native American population in the United States as he did. Last summer, he and his wife Michelle visited the Lakota Reservation 'Standing Rock' in North Dakota to get an impression of the misery in the reservations." Obama also invited representatives of tribal governments to a conference in the White House every year since he took office. Their umbrella organization, the National Congress of American Indians (NCAI), has signed an official resolution for Peltier to be pardoned.

Peltier is said to be responsible for the deaths of two FBI officials who got killed in the Lakota Reservation "Pine Ridge" (South Dakota) in 1975. But he is innocent. Despite the proven formal errors and the obstruction of defense, it was not possible to achieve a revision or a re-opening of the proceedings. Therefore, being pardoned by President Obama is his only chance for freedom. The 70-year-old is almost blind in one eye due to a stroke in 1986. He also suffers from diabetes and a heart disease.

Over the years, many prominent voices have taken sides with Leonard Peltier, including the late Simon Wiesenthal, director of the Documentation Centre of the Association of Jewish Victims of the Nazi regime; the Nobel Peace Prize winners Rigoberta Menchu and Nelson Mandela, artists such as Robert Redford and Harry Belafonte and many members of the US-Congresses as well as members of parliament in Canada, Belgium, the Netherlands, members of the European Parliament and members of the German Bundestag. In addition to the STP, Amnesty International advocates for the civil rights activist too.