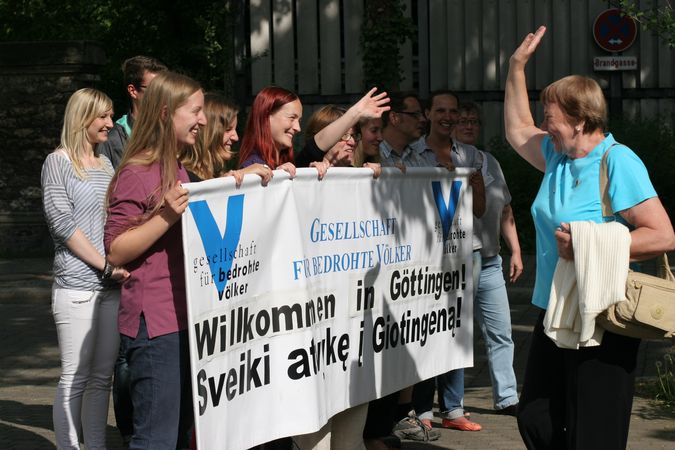 Tilman Zülch, Secretary General of the Society for Threatened Peoples (STP), calls on the federal government to finally help the last "Wolfskinder" ("wolf children") from East Prussia who are currently living in Lithuania – and to compensate them for their suffering after Königsberg (now Kaliningrad) was taken by the Red Army in 1945. "It would be a long overdue gesture to pay Soviet prisoners of war a symbolic sum as a compensation for their humiliation and deprivation," said Zülch in Göttingen on Friday. "Thus, it is all the more disgraceful that federal government has so far refused to help the innocent victims of the Soviet occupation of Königsberg."

"It is high time that the ‘wolf children’ are granted pension payments to make at least the last few years of their life a bit easier," said the human rights activist. "In Lithuania, there are now less than a hundred of these Germans who, as infants, had to suffer from the horrors of the Soviet occupation. Many of them were forced to watch while their parents were murdered and raped by Soviet soldiers, deported to Siberia or died as a consequence of hunger and diseases. The ‘wolf children’ deserve regular support payments." According to various estimates, about 120,000 of the approximately 150,000 Germans who had not fled from Königsberg before the city was taken by the Red Army died during the Soviet occupation.

Many of the orphaned ‘wolf children’ were left completely to themselves. In order to find food, they hid on freight trains to travel from Königsberg to neighboring Lithuania. They wandered through the woods, where most of them were eventually found and taken up by Lithuanian families. Most of the children forgot about their past – and it was not until 1989 that they learned where they came from. Many of them moved to Germany, often together with their Lithuanian family members. Some of them stayed in Lithuania, where most of them live in very poor conditions. The STP demands that they should receive pension payments just like citizens of Germany.