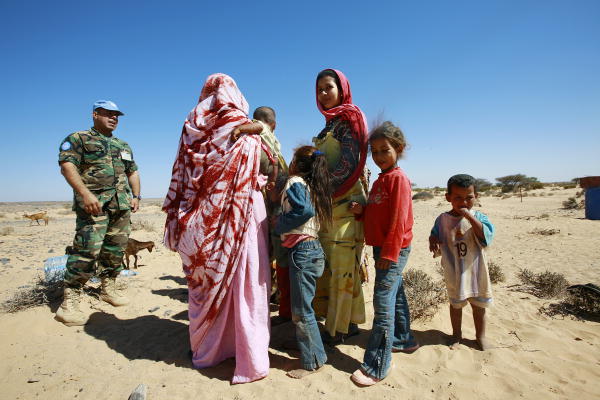 The Sahrawi people in Western Sahara hoping that – after sixteen years of futile efforts in the scope of MINURSO – they will finally be able to decide about their future in a free referendum. Photo: United Nations Photo via Flickr

The Society for Threatened Peoples (STP) has appealed to the World Security Council to extend the mandate for the UN Mission MINURSO in Western Sahara, which will expire at the end of April, and to ensure an effective protection of human rights. The highest UN body will be discussing the future of the MINURSO mission on Tuesday. Next Thursday, the council will have to decide whether the UN mandate will be extended, and who will be the next UN Special Representative for Western Sahara. Horst Köhler, the former German Federal President, appears to be the most promising candidate.

“This will be a mammoth task for Köhler, who is an expert on the African Union, because the dispute over the future of Western Sahara is escalating. The occupation power of Morocco is becoming more and more uncompromising – massively suppressing freedom of expression and the right to demonstrate in Western Sahara, and trying to bribe the African governments to provide support in the scope of international politics,” criticized Ulrich Delius, the STP’s Africa expert, in Göttingen on Tuesday. “The Sahrawi people in Western Sahara are putting great trust in the former Federal President, hoping that – after sixteen years of futile efforts in the scope of MINURSO – they will finally be able to decide about their future in a free referendum."

“Köhler will be facing greater challenges than during his time as a Federal President,” said Delius. “All his predecessors failed to ensure that the traditional inhabitants of Western Sahara will be able to decide about their future in a popular vote. Köhler will be dealing with extremely sensitive issues in connection with the dispute, which has been going on for years. We hope that he will not let himself be guided by the French interests, as France ostentatiously took sides with Morocco years ago.”

The UN has been discussing a referendum for Western Sahara since 1991. It is to be carried out by the MINURSO. However, Morocco has always rejected such a referendum, insisting that the former Spanish colony – which is rich in raw materials – is an integral part of the kingdom. The dispute with the Sahrawi people has been growing ever since Morocco started trying to force the Sahrawi Arab Democratic Republic (which was founded by the Sahrawi people) out of the African Union. Thus, as the Sahrawi people are becoming more and more dissatisfied, the war between the Moroccan army and the Frente Polisario might break out again. The ceasefire agreement had been signed in September 1991.